CMS just released their proposed MACRA regs (Cliff Notes version), and as you could expect, every specialty society and interested party dug in and critiqued.  The rule runs a thousand pages and will have a substantial effect on the future of provider payment. In case, you have not heard.

Each organization will cut their sections of interest out, parse them, synthesize their analysis, and return a long letter to CMS. They will offer the correct paths on which the agency should proceed–lest they go forward uninformed taking down entire blocks of the healthcare system on account of willful neglect and ignorance.  The letters will start with a friendly salutation along the lines of, “We commend the Secretary on her wisdom and hard work….BUT, we have an eensy weensy problem on some issues,” and so the turn goes.

The inpatient docs will hit the rough patches as they relate to fitting hospital-based practitioners into an outpatient focused model; the nephrologists will sound off on integrating dialysis payments within a medical home; the surgeons will focus on attribution of adverse post-op events weeks after patients leave the hospital; and the pathologists will just throw their hands up and say, “huh, should we just skip this party.”

Every society concerns themselves with their piece of the pie.  Not a shock.

But one thing that most folks overlook is the role the AMA plays in the MACRA narrative–and all other high-level policy plays that come down the regulatory pike.  Having attended the AMA House for some years now, I can affirm that many of the issues that would present a collective action fail for medicine writ large, get dealt with en masse in the one organization both the legislative and executive branches look to for a unified response.

For example, meaningful use and technology burdens, the SGR fix, reporting measures, etc., all get a more active play through one main voice.  This as opposed to what would be a meager projection of all the less weighty players involved in the crafting of whatever end product happens to be on the burner for that quarter–if they each hacked it solo.

Outsiders will have many gripes with how the AMA views medical malpractice, rule delays, scope of practice laws, our level of pay and much more (“doctors carping again”)–as will docs inside the organization I should add.  However, when it comes to conditions amenable to gain that create havoc and misery for a majority of practitioners, around which most docs and non-docs would concur, the AMA brings the A game.  But for this one sizable entity calling the plays and circulating the “Dear Secretary,” letters, a lot would get left on the cutting floor.

The AMA gets beat on for myriad reasons, but disregarding free riding should not be one of them.  That’s in addition to all the public health, patient and provider equity, and environmental and educational issues they do serious, serious work on.

If you have seen the movie A Few Good Men, Jack Nicholson’s Colonel Jessep, a jingoistic hard-driving character, and general tough guy exclaims back to Tom Cruise as the cross-examining attorney:

You don’t want the truth because deep down in places you don’t talk about at parties, you want me on that wall, you need me on that wall. We use words like honor, code, loyalty. We use these words as the backbone of a life spent defending something. You use them as a punchline. I have neither the time nor the inclination to explain myself to a man who rises and sleeps under the blanket of the very freedom that I provide, and then questions the manner in which I provide it. I would rather you just said thank you, and went on your way, Otherwise, I suggest you pick up a weapon, and stand a post.

Now that does not bring the AMA exactly to mind, but you get the spirit of the reference.  It’s easy to sit back and let someone else handle the big stuff while everyone else focuses on their little fiefdoms.

What got me thinking about this was the degree to which the AMA (still) has hefty weight at the lobbying table.  Despite how cynics see things today, it’s an incrementalist’s world and opinions from all groups must be aired out.  Our lobbyists are no better than the next well-monied outfit, and everyone deserves their say.  The AMA certainly has some money to spend on saying what needs saying.

Here are some visuals to ponder on culled from OpenSecrets.org.  You also can dismiss the American Medial Association at your peril: Wilting on the vein, huh?  Lagging membership you say? They speak for no medical group these days.

Think a fly by night operation has $22 million per year to throw around for bingo night and bake sales? That is fourth highest in the arena.  Not just for healthcare, but from everybody!  And if you want to pick out the notable healthcare players in this echelon, we sit above Phrma, AARP, AHIP and the AHA (just after school clubs). 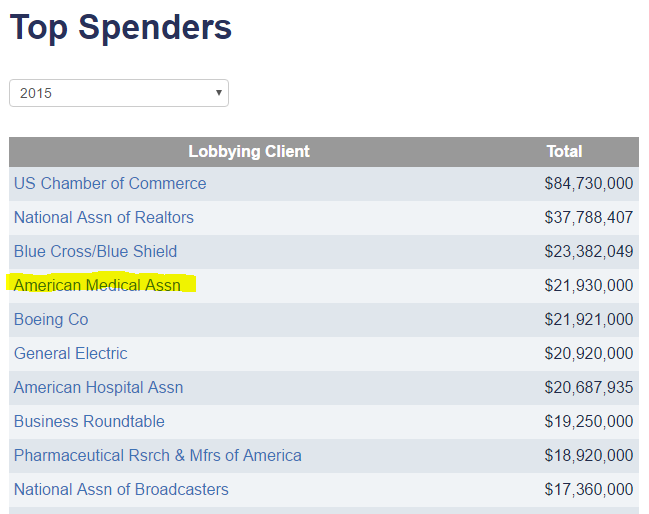 Let’s take a look at healthcare professionals then. I believe the gap between $22M and the silver medalist at $3.5 will buy a few additional Teslas.  Think the Whitehouse and Congress do not pay attention? 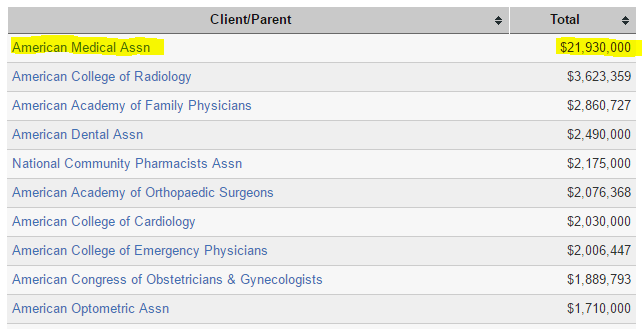 Speaking of politics, here is the split on AMA giving.  Of late, more PACs with a GOP tilt (most docs are Republicans, however). 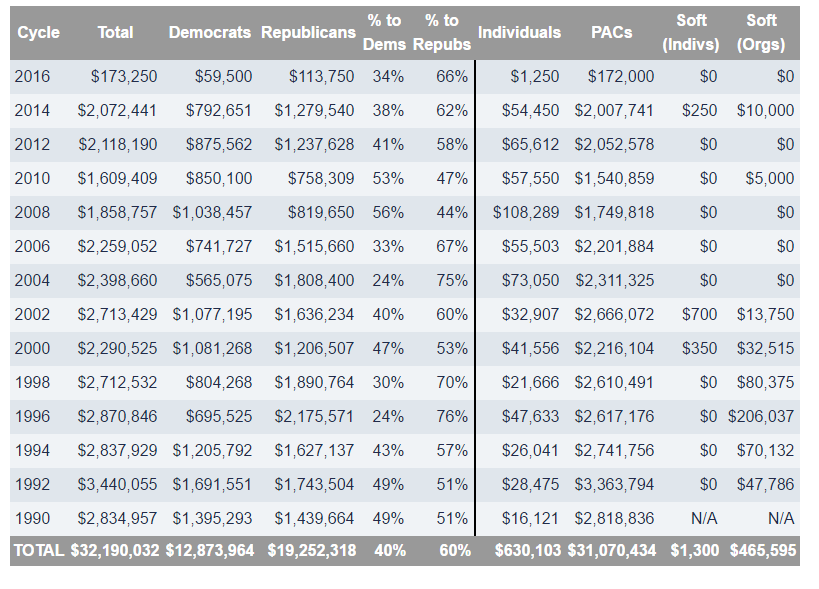 If you think the AMA is not longer relevant, you are mistaken.  What will be in a decade I cannot say, but as for today, dollars and a bully pulpit trump conventional wisdom every time.

1
The kids are navigating the crisis with maturity and aplomb and way too much “Clash Royale.” Online school somehow went through the wash and has shrunk to 3 hours, including lunch. They continue to seek ways to fill up the day. We’ve tried to set some clear goals, pulled out the QI toolkit and made […]
Read More
COVID-19: A Resident’s Perspective and Helpful Tips
By Kathryn del Valle, MD
April 17, 2020 |

0
As senior internal medicine residents approaching our graduation this summer, my classmates and I have experienced a very different final few months of training, thanks to COVID-19. Far beyond not being the calm coast to the finish line that I had personally hoped for, this final quarter of residency will undoubtedly prove to be one […]
Read More
Economy or Humanity? Thoughts on How the Pandemic will Impact the Healthcare Industry
By Sowmya Kanikkannan
April 15, 2020 |

1
Not enough ventilators, a profound lack of personal protective equipment (PPE) and overwhelmed healthcare professionals. Hospitals and systems stretched beyond capacity in the hardest hit states. Routine care ground to a halt. COVID-19 has pushed the US healthcare system to its limit and exposed its fragility. It’s not a big secret that the US healthcare […]
Read More