America’s Physicians: Overworked and Burning Out

According to a new survey report released by The Physicians Foundation, 80% of physicians across all specialties report being at full capacity or overextended, and 78% reported sometimes, often, or always experiencing feelings of burnout. Sixty-two percent of U.S. doctors are pessimistic about the future of medicine, and 49% wouldn’t recommend medicine as a career to their children. This paints a pretty grim picture of medical practice in the U.S. in 2018. 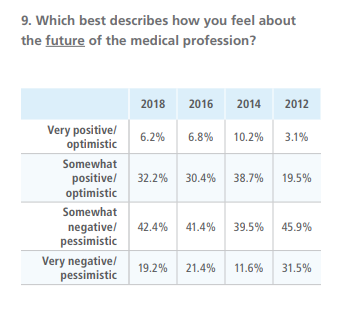 The survey is conducted every other year by the Physicians Foundation with the assistance of Merritt Hawkins, and I wrote a blog post about the 2016 survey results, which showed alarming levels of disengagement and burnout. So I thought it would be worthwhile looking over the 2018 report to see if anything has improved.

It appears that things haven’t changed much for doctors since 2016 regarding their attitudes toward their work. The biggest take-away from this year’s survey is that doctors overall are working fewer hours and seeing fewer patients but still struggling with morale and burnout. One important trend that was highlighted is the move toward employment by hospitals or integrated delivery systems; only 31% of physicians are independent practice owners or partners, vs. 49% in the first such survey conducted in 2012. Interestingly, employed doctors tend to work longer hours but see fewer patients then their practice-owner colleagues.

The 39-question survey is sent out via e-mail to more than 700,000 physicians (everyone the AMA or Merritt Hawkins has in their database), 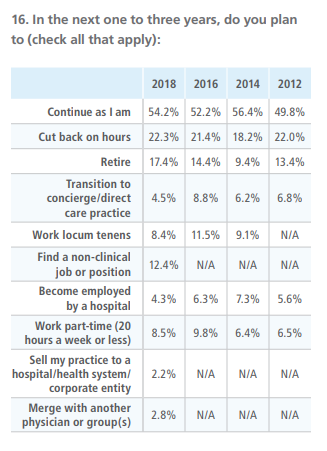 and this year 8,774 physicians responded; the statistics geniuses at the University of Tennessee say the survey results have a margin of error of +/- 1.057%. Interestingly, that’s less than half of the 17,236 physicians who responded to the survey in 2016, and I wonder if the reduction in response rate itself indicates an increased level of disengagement among doctors.

Doctors expressed similar frustrations with specific aspects of their work this year compared to 2016. The single biggest frustration cited by doctors was EHRs (39% this year vs. 27% in 2016), followed by regulatory/insurance requirements (down to 38% from 58% in 2016) and loss of clinical autonomy (37% vs. 32% in 2016). Survey respondents reported working an average of 51.4 hours per week, of which 11.4 hours (22%) are spent on non-clinical (paperwork) duties. 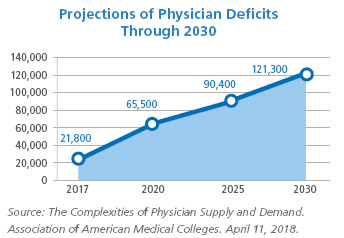 Alarmingly, about 46% of doctors reported making plans to change their career trajectory in some way, such as cutting back on hours or working part time (31%), retiring (17%), finding a non-clinical job or position (12%) or working locum tenens (8%). This has significant implications for physician manpower planning and healthcare access, and it’s interesting to note that the proportion of doctors reporting being at capacity or overworked has remained relatively stable since 2012 despite a significant increase in the deployment of nurse practitioners and physician assistants over that period. It’s not clear from these data whether the presence of NP/PAs doesn’t really help increase capacity much or whether their deployment just hasn’t been enough to offset the loss of physician FTEs to retirement, part time work, and movement into non-clinical jobs. The Association of American Medical Colleges has forecasted a shortage of up to 121,000 U.S. physicians by 2030, and physician shortages are already being felt in many or most non-metropolitan areas of the country – and even in some urban communities.

Among the most distressing findings for me, as a recovering hospital administrator, is that 46% of the respondents viewed the current state of relations between physicians and hospitals as 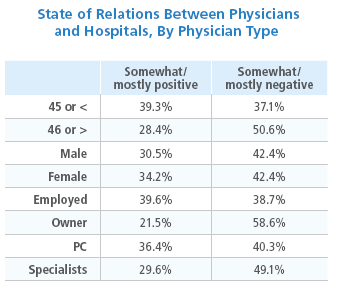 somewhat or mostly negative and adversarial. Owww! In addition, a majority of physicians (58%) are skeptical that the trend toward hospital employment of physicians is a positive one that is likely to enhance quality and decrease costs. And although 47% of doctors said at least some of their compensation is tied to “value-based metrics,” more than half (57%) don’t think value-based compensation is likely to improve quality of care or reduce costs. More broadly, 63% of doctors believe that physicians have little or very little ability to influence the healthcare system

Unfortunately, the survey only categorizes physicians as either primary care (including family medicine and general internal medicine regardless of practice setting), or specialists. So there’s no way to know for sure how applicable these survey results are to the world of hospital medicine. But these results definitely resonated with me because I hear similar concerns expressed by hospitalists across the country. The good news, in a way, is that hospitalists are not alone. Your colleagues in other specialties are experiencing the same stresses you are. The bad news is, there aren’t any quick fixes to these issues, and it doesn’t appear that any of these trends will change soon.

So what can we do about all of this? There is no easy solution, but one important step is for each of us to work to ensure that our own practice environment (our hospitalist group, our hospital or health system, our personal and family life) is taking the issue of physician wellbeing seriously. Is your hospital or medical group taking proactive steps to address very real and pressing issues of workload and work redesign across specialties and care settings? Does your hospital have an active physician wellbeing committee, and is the committee taking concrete action to promote recognition and appreciation, workplace social cohesion and occupational solidarity, improved conflict management skills, peer support, work-life balance and other important aspects of physician wellbeing – rather than just being a body that deals with the fallout of all of this: individual physicians who have behavioral or substance abuse issues? Is your HMG constantly working on ways to better support efficient, rewarding hospitalist practice? Is it developing creative strategies to enable part-time work and/or job enrichment? And are you personally pursuing self-care strategies that can increase your resilience, and including your family and friends in your self-support efforts?

For those of you who have success stories in how your organization or group (or you personally) have successfully addressed some aspect of overwork or burnout, we’d all love to hear about them. Please join the conversation and share your experiences by commenting below.

About the Author: Leslie Flores

Leslie Flores is a founding partner at Nelson Flores Hospital Medicine Consultants, a consulting practice that has specialized in helping clients enhance the effectiveness and value of hospital medicine programs as well as those in other hospital-focused practice specialties since 2004. Ms. Flores began her career as a hospital executive, after receiving a BS degree in biological sciences at the University of California at Irvine and a Master’s in healthcare administration from the University of Minnesota. In addition to her leadership experience in hospital operations, business development, managed care and physician relations, she has provided consulting, training and leadership coaching services for hospitals, physician groups, and other healthcare organizations. Ms. Flores is an active speaker and writer on hospitalist practice management topics and serves on SHM’s Practice Analysis and Annual Meeting Committees. She serves as an informal advisor to SHM on practice management-related issues and helps to coordinate SHM’s bi-annual State of Hospital Medicine Survey.