Paul Kalanithi was a neurosurgeon and writer. He was not a neurosurgeon who just so happened to write. And he was certainly not a writer who just so happened to perform craniotomies. He spent a life devoted to developing both sides of his brain – exercising them rigorously, never letting one side atrophy from the other, like one may perform an even number of arm curls in the gym – resulting in a remarkable mastery of both the literary and the scientific. What a rare and precious gift. You could easily turn to his many impressive credentials, degrees, and awards that prove this dual mastery, or you could simply just read the first few pages of his book, When Breath Becomes Air (Random House, January 2016).

In case you don’t know, the past tense is because Kalanithi died this past year. At the age of 37. From widely metastatic lung cancer.

The true power of this book is not in the honest, humble, and courageous manner Kalanithi tells an eyes-wide-open account of the devastating story of his diagnosis, but in the way that the book is so ultimately reaffirming and uplifting.

He tells a story of operating on a patient with Parkinsonian tremors. As he placed the electrode deep in the brain aiming for his target, the tremor improved, but the patient proclaimed, “I feel … overwhelmingly sad.” Kalanithi turned the current off and the patient felt better. They adjusted some settings and tried again. Once again, the patient was overcome with profound sadness: “… it just feels… so sad. Just dark and, and… sad.” Kalanithi pulled the electrode out and repositioned it two millimeters to the right. This time, the tremor went away and the patient felt fine. This felt something like my experience reading this book. As I read, there were times where Kalanithi stuck that electrode right there in my brain and turned the current all the way on. My eyes began to swell, embarrassingly as I sat in the middle seat of a cross-country flight, and all felt so dark and so, so sad. But then, perhaps naturally sensing this was not really the effect he sought, he moved the electrode just ever so slightly. And all felt somehow better. 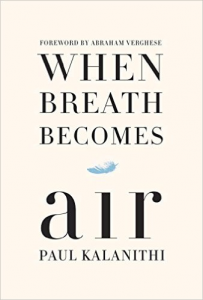 At first glance of the cover, it may seem the little blue feather is floating toward the ground, but by the end, it is clear it is gently hovering there moving a little higher and then a bit lower and then upward again, never to truly land. This is the magic that Kalanithi has achieved by writing this extraordinary book: he makes his all-too-finite experience timeless.

It’s a memoir, but one that seems less interested in recounting events and more committed to deep meditations that pull meaning and draw on a profound reservoir of knowledge forged through Kalanithi’s early realization that “literature provided the best account of the life of the mind, while neuroscience laid down the most elegant rules of the brain.” He describes his experience with such sober honesty and supreme prose, extracting and sharing this hard-earned wisdom with all of us, as if to say, “here, now you can learn what I learned, without having to suffer this fate.”

The book is not divided into chapters, but rather into two large sections. This structure limits the artificial boundaries drawn, instead seamlessly walking from theme to theme, story to story – sometimes zooming ahead past years, sometimes slowing down to spend a few pages reflecting on a maybe routine, but particularly poignant, moment. Isn’t that just like life? For those of us that have weathered the tough years of medical training, who have shared the thoughts, fears and inappropriate jokes in the anatomy lab, who will never forget the first chest we pounded on during a Code Blue, Kalanithi’s accounts bring a flood of shared experiences. They ring true in their humanity and in the naked way he talks about both the good and the horrifying that ultimately compress the days of working in a hospital. He neither glosses over the experiences with a nostalgic pastel brush, nor boils them down into cynical monotones. It seems clear that he was never a sneering complainer nor a bubbly idealist. He was simply brilliant, hard-working, compassionate, cerebral, deeply moral, inspiring, and honest. And so is his book.

About the Author: Christopher Moriates, MD

Christopher Moriates, MD is a hospitalist and assistant professor at the University of California at San Francisco, Director of the Caring Wisely program for the UCSF Center for Healthcare Value and Director of Implementation Initiatives at Costs of Care. He co-authored the book Understanding Value-Based Healthcare (McGraw-Hill, 2015), which Atul Gawande has called “a masterful primer for all clinicians,” and Bob Wachter said is “essential reading for everyone who care about making our system better.” This post is part of a series for The Hospitalist highlighting topics or lessons from this book.

The Marshmallow Will See You Now
By Jordan Messler
February 18, 2020 |

0
This is the time of year to sit back at night, in front of the fireplace, a cup of hot chocolate in hand, warming up after the coolness of the day. As I sip, I notice the marshmallows bobbing up and down and reflect on the impact those white confections have in medicine. Yes, marshmallows […]
Read More
Hospital Medicine Has a Specialty Code. Is the Memo Still in the Mail?
By Bradley Flansbaum
September 24, 2019 |

0
Look up from your stack of journals lately? You will note DNA analysis has gotten awfully popular. Mom, dad, and the rest of the clan want in and the temptation to obtain the blueprint that makes you, you has an almost hypnotic-like draw. You are curious if what grandma told you—half of your “G, C, […]
Read More
Think You Know What An ACO Is? I Promise, This Post Will Make You Smarter.
By Bradley Flansbaum
March 6, 2019 |

0
You have read constant references about ACOs (accountable care organizations) in every journal you pick up until you are blue in the face, I’m sure. You or your hospital might even be participating in one. Mostly all straight Medicare patients (the two-thirds not in Managed Medicare) are eligible for inclusion. You need two things to […]
Read More