Seen the State of Hospital Medicine report for 2018? I have, and there is erudition galore. Here is one that has me contemplating.

I was surprised to see the breakdown below. Not so long ago, I would say less than ten years, the scatter for adults was more balanced. By that I mean, the 99222 codes were more prevalent. To see seven out of ten submissions go high complexity over the last decade is an interesting change. Why? 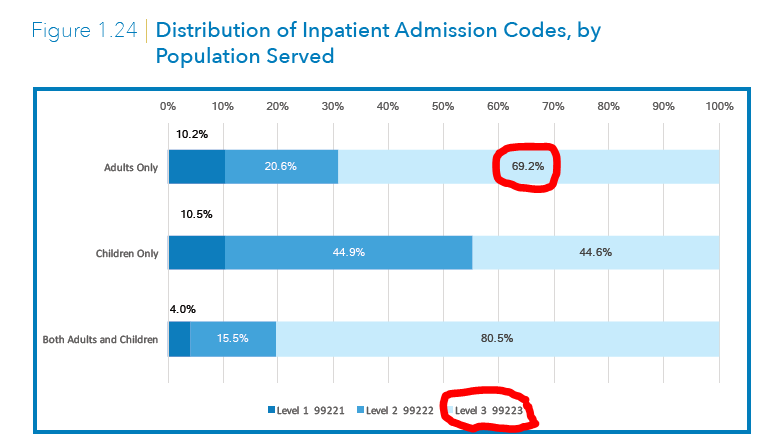 Well, if you accept the concept of “the normal” hospital patient, we should see perhaps a, 20% low, 50% intermediate, and 30% high complexity distribution. That is not the case. There is a name for what is happening, and it’s a big problem for payers. Its called code creep and invariably, in any reimbursement system, there is a tendency not to code to the individual in the bed, but to the documentation itself (for more dollars and to show “sicker” folks). EMRs have made this easier by allowing providers to include in their records elements they might have glossed over in the past. Additionally, EMRs have also allowed us to blow in note elements that boost the intensity of illness and to adhere to regs to boost CMI, again, for reasons mentioned above.

This is a survey, albeit a big one, and CMS can fact check how hospitalists code (we have a specialty designation as of 2016—we will know soon enough). if they want to put the kibosh on this, they can rebase payment or audit high profile systems. Word gets on the street fast. But even if they wished to build a better mousetrap, by paying by time lets say, docs will suddenly bill at the 26th minute (if the break to high complexity is 25). We always find a way–and it’s a cat and mouse game in perpetuity until it is not. CMS is talking big on this now and we at SHM are involved and want to provide guidance when and if the feds go full on E&M postal.

So what’s the answer?

That is a separate post, but global fees are one. But its hard to do and patient care attribution is hard to measure. Theory eats reality for breakfast.

Theories on the displaced and misplaced 99222 welcome.

Why all our current efforts to cut waste won’t save money after all
By Chris Moriates
February 11, 2020 |

1
I am feeling discouraged. Actually, I am pretty frustrated. I truly believed that if we could “choose wisely” and cut out the nearly $1 trillion of waste in health care that we would make a real dent in costs in health care. Not only that, I even thought that decreasing these total costs of care […]
Read More
Hospital Medicine Has a Specialty Code. Is the Memo Still in the Mail?
By Bradley Flansbaum
September 24, 2019 |

0
Look up from your stack of journals lately? You will note DNA analysis has gotten awfully popular. Mom, dad, and the rest of the clan want in and the temptation to obtain the blueprint that makes you, you has an almost hypnotic-like draw. You are curious if what grandma told you—half of your “G, C, […]
Read More
Trustworthy Individual Performance Measures? Show Them To Me.
By Bradley Flansbaum
June 10, 2019 |

0
Public and private payers incentivizing providers (P4P) to coax desired clinical behaviors have failed. Both CMS derived measures and those used by commercial insurers, many of which overlap, fail to pass Good Housekeeping standards and lack the reliable characteristics indicators must possess. Whether those indicators are valid, attributable, or meaningful makes all the difference in […]
Read More