COVID-19: Can the Chaos Be Controlled?

The choices for conversations are either COVID or Netflix. Coronavirus or the latest binged show. Sports is no longer an option, unless you want to discuss how I made that putt in the homemade mini golf course. What’s for dinner or what’s the latest graph? We are all meteorologists during hurricane season and now epidemiologists amidst this crisis. We try to find meaning in the chaos, interpret the findings, and place order in the world. 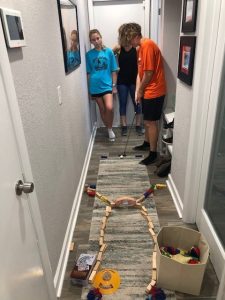 Just a typical game on the home mini golf course

My oldest kid’s birthday came and went last week. A happy birthday drive-by brought some joy amidst an otherwise canceled celebration. An hour of family and friends singing and honking their way past the house, with signs, painted minivans, and gifts and cards tossed on sidewalks to later be collected. For the birthday entertainment, we set up a several-hour game of “Escape the House,” with puzzles and scavenger hunt clues. It was fun until we realized even if my 14-year-old solves them all, the family can’t win this game. No escape for now. 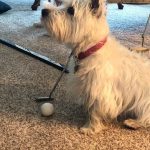 Memorable? Definitely. Normal? Definitely not. Coronavirus is to blame for a lot of our “new normal.” We recognize and remind each other we are luckier than many to do even these little things.

We gathered last week for the Passover holiday – one usually filled with memories of family and festivities. The traditional story about the 10 plagues and the angel of death hit too close to home. A holiday reminding us of the story thousands of years old, with ancient themes, felt like a retelling of current events. The angel of death passed over this house but not over thousands of others. The Passover Meal, the Seder, means “order” in Hebrew. Getting the family on Zoom took longer than the traditional reading of the Haggadah. We are in a world where disorder rules the day. Randomness in death. Fortuitous in life.

Passover intertwines with other plagues. In the Middle Ages, the bubonic plague ravaged countries every generation starting after the Black Death of 1347. Without the knowledge of germ theory, of science, the search for a reason, for order, meant finding who to blame. It was God’s punishment towards the sinners, the poor, the alcoholics, the unclean. Or the source sprang from travelers from the East. Or any foreigner. Assigning blame – a long-standing human tradition. The bad air, the poisoned air, the miasma, was the culprit. These false theories often fell at the feet of the Jewish communities. Thousands were tortured or burned after giving forced confessions. In a disease that left no one spared, some noted that the Jewish community had fewer cases, hence they must be the poisoners.

Passover may have lent some truth to fewer buboes, rings around the rosy, and hence death in the Jewish communities. The tradition of Passover called for spring cleaning. All the grain stores were removed as part of the holiday preparation. In the removal of the wheat, it’s possible that the local rat population disappeared. The rats carried the fleas that transported Yersinia pestis. Could this annual Passover tradition have left the community of Jews less likely to acquire the bubonic plague? Maybe. An interesting theory. A fortuitous tradition that saved lives? Yet, this tradition led to the decimation of communities, as they were then blamed and exterminated.

Blame, conspiracies, spread like wildfire today as they have since, well, the advent of fire. Bacteria and viruses have no prejudice. Only humans.

Xenophobia spread in the earliest days of the coronavirus. Bigotry against Asian Americans for a virus that started in bats or pangolins? Maybe stop watching Batman, or simply understand how viruses work. But don’t blame an entire population for a virus.

More cases in African Americans, so it’s their fault? No. Systemic issues related to race, access to healthcare, and other inequities are at the root.

Spanish flu was blamed on a country that was simply first to report the outbreak, while other countries suppressed their media reports during WWI.

This is a disease about randomness. At least at the start. Now it’s a disease about leadership, the essential workers on the frontlines, moving forward, and ultimately, testing. Let’s get back to order. We can’t waste our energy on blame.

South Korea is emerging from the chaos with a plan. New Zealand is an example of how a leader with empathy, decisiveness, and a public health plan is keeping testing per capita high, trust elevated, and death rates low, with only 12 deaths as of April 20, 2020.

In Singapore, with a policy of “test, trace, isolate,” the curve stayed flat. (Though a recent increase was noted, particularly in more vulnerable areas.)

How are countries opening back up, as we watch our cases continue to outpace the rest of the world, and we allow our nurses, the heroes of this pandemic, to wear garbage bags as PPE? We can contain the randomness with less time on placing blame and more time on creating structure. The energy needs to be in listening to the science, amassing a public-health initiative, spurring action and creating some order from the chaos. Read this recent story from The New Yorker on how to take action in 5 steps: social distancing, contact tracing, testing, isolation and treatment. Somehow we need to get from 100,000 tests per day to many million per day. Use the Defense Production Act. Mobilize.

Twitter hashtags have a better command of the plan than the country.

This is all the frustrating part. In a world where randomness can be the most challenging part to comprehend, at least I get that. It’s a virus. It doesn’t play favorites. It’s random.

I can understand the initial chaos. The lack of emergence of order from this randomness is driving me batty.

Upside-down birthday celebrations, community traditions broken up. Those events are the new normal. That structure I can hang onto for a while. Lack of PPE, long food lines, massive unemployment… How long will that last? The persistence of no clear national plan, with testing, tracing, and isolating capabilities has me worried that this won’t pass over anytime soon.

Jordan Messler, MD is the Executive Director, Quality Initiatives at Glytec and works as a hospitalist at Morton Plant Hospitalist group in Clearwater, Florida. He previously chaired SHM’s Quality and Patient Safety Committee. In addition, he’s been active in several SHM mentoring programs, including Project BOOST and Glycemic Control. He went to medical school at University of South Florida, in Tampa and completed his residency at Emory University. He recognizes the challenges of working in a hospital that lines the intracostal waterways of a spring break mecca and requests that if you want to be selected as a mentored site, you will have a similar location with palm trees and coastline nearby. He tries to find time to sit on the beach with his family to escape the hospital’s miasma. While there, he looks forward to reading about the history of hospitals/medicine, and how it relates to quality. But inevitably, he will have his daughter dumping sand on him and then has to explain to his wife why their daughter is buried up to her neck.

0
Each day, we’re inundated with news about the COVID-19 pandemic and how it continues to strain our healthcare system and resources. With more than 1.15 million positive cases in the U.S. and over 67,000 deaths as of this writing, it has been a scary yet humbling experience for everyone. There is no doubt this pandemic […]
Read More
For COVID-19, Beware the Calm, Not Just the Storm
By Michael Gillette, MD, MSPH
April 29, 2020 |

0
For the past week, I’ve seen a glimmer of optimism in my New Orleans health care colleagues. The emergence of hope is no small thing. This pandemic has been inches from overwhelming those of us on the front lines for weeks. Louisiana has one of the cases in the country, and St. John the Baptist Parish—just […]
Read More
COVID-19: Can the Chaos Be Controlled?
By Jordan Messler
April 24, 2020 |

0
The choices for conversations are either COVID or Netflix. Coronavirus or the latest binged show. Sports is no longer an option, unless you want to discuss how I made that putt in the homemade mini golf course. What’s for dinner or what’s the latest graph? We are all meteorologists during hurricane season and now epidemiologists […]
Read More