The Ebola panic has died down; while many are under monitoring, there have been no further de novo U.S. cases since October 15, and only two more “imported” cases. Travelers are being screened and resources are heading to areas where they are needed. At my institution, Hospitalists have led the way; over half my division volunteered up-front to provide necessary care. I ended up in a lot of planning and policy meetings, where we internally crafted a comprehensive plan to deal with any Ebola-related eventuality. Nationally, the Centers for Disease Control and Prevention (CDC) have created many useful resources for people and institutions needing them. We now have guidelines for speaking to our children about Ebola and for taking care of Ebola-exposed pets, in addition to more trenchant issues. We now have “Ebola centers,” hospitals capable of caring for suspected or confirmed Ebola patients with CDC support. Despite all the now available resources and guidelines, there’s one thing still lacking, and that is clear guidance about the ethics of Ebola.

Ebola virus disease (EVD) in the US is a different beast than that rampaging in West Africa. We can expect our patients to survive–so far. Some have been ventilated and some have been dialyzed, but most have survived. American EVD patients have been pretty healthy, pretty young, and all but one were medical people–just like us, presumably. However, we’re talking about a disease with a mortality of 80% or so in some settings, spread by contact with fluids, including aerosols, and the viral burden rises as patients get sicker. How can we best care for patients and still protect staff? Should we limit what we do? 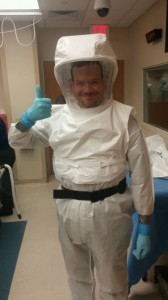 Patients who die of EVD are unequivocally the most infectious. There is probably no setting where a healthcare worker has a higher risk of splash, splatter, or aerosol exposure than during CPR. And for how long can one provide good chest compressions in a TyVek suit? What about the curious ethics of a universally-applied procedure with an 80% or higher failure rate? Every clinician I’ve asked –approaching 100 nurses and physicians at this point — agree that “no CPR” is appropriate for EVD patients.

A Google search reveals that my concern is common. There seems to be a consensus that CPR is too risky, and “some” hospitals may withhold “some” cares. Hospitals can also hide behind other policies–for example, mandating full personal protective equipment (PPE) in all care situations, a reasonable policy, means that no one is going to be able to rush into a code. It’s also sensible that someone unstably ill from EVD should not have surgery, but what if she is just febrile and “ruling out,” but clinically seems very much like appendicitis? Would you CT, or go to laparotomy, or wait? Did you train Radiology and Surgery techs on PPE and how to clean the scanner? What if he is better and recovering but still has detectable virus in the bloodstream? My favorite worst-case scenario is a car full of febrile Liberians, unconscious on scene after an accident. Thankfully, airport screening makes that less likely now…

I think that taking a stand is important and that hiding behind other policies is dishonest. We must first protect the healthcare workers going in harm’s way. Second, what’s the first rule of CPR? Make sure the scene is safe, or at least controlled. You wouldn’t defibrillate a guy in a puddle of water or do ACLS in a burning building. I’d add that as a physician, I feel much less at risk than the nurses caring for these folks will be, and I can’t throw someone under this bus if I won’t go myself. So, here are my suggested simple rules:

This is happening every day in Africa. I hope it doesn’t come up here. I really hope that it doesn’t happen to a kid here. But it could, and it behooves us to think about ethics early, and codify them if we can.