Two notable hospitalist studies out late last month–one from JAMA, and the other from JHM.

In this cohort study of 3 years of Medicare data from 229 hospitals in TX, covering 114K medical admissions of patients with a 3-day to 6-day LOS, patients receiving care from hospitalists whose schedules permitted continuity of care had significantly better outcomes, including lower 30-day mortality after discharge, lower readmissions, higher rates of discharge to the home, and $223 lower 30-day post-discharge costs. 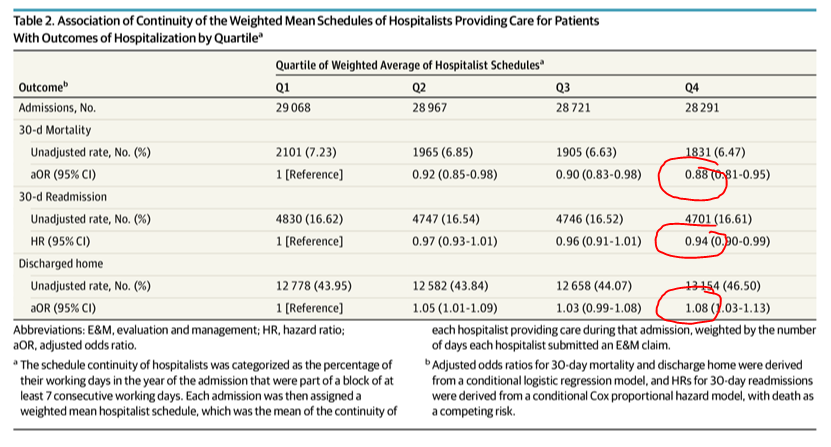 The Bottom Line: Continuity matters. Surprisingly, there were fewer 7-day consecutive shift workers in this TX cohort than I would have guessed (less than half). Moreover, professional charges and HH use were higher in the Q4 group, whereas SNF use was lower (see table 3). The explanation may be state or culture-specific, or if analyzed deeper, perhaps continuity has attributes related to how PAC and specialist consulting are used by docs on service for longer (or fewer) consecutive days. I don’t know.

This was a one site study out of Indiana. The investigators used both geotracking and observation to assess hospitalist direct and indirect patient time for 10K patient episodes.

The bottom line here: Geographic clustering has upsides, but it also comes with a cost. In exchange for more patient F2F time, hospitalist accessibility to ancillary staff increases. One could surmise, that grind will increase the intensity of working on clustered units and increase the risk of burnout. Also of note, the direct to indirect care ratio was 3:1, even-steven in both arms. Not a shocker as we know from past trials more time is spent on charting and EMR than direct contact. Marcus Welbys we are not.

Work the Program for NP/PAs, and the Program Will Work
By Tracy Cardin
December 27, 2019 |

4
Hospital medicine has been the fastest growing medical specialty since the term “hospitalist” was coined by Dr. Bob Wachter in the 1996 NEJM article. The growth and change within this specialty is also reflected in the changing and migrating target of hospitals and hospital systems as they continue to effectively and safely move from fee-for-service […]
Read More
It’s the Most Wonderful (and Stressful) Time of the Year
By Leslie Flores
December 19, 2019 |

0
As if you didn’t have enough things stressing you out right now with both the holidays and flu season upon us, I thought I’d offer up a friendly reminder that we are now less than a month away from launching SHM’s 2020 State of Hospital Medicine Survey. We barely get to catch our breath from […]
Read More
Hospitalists, Geographic Clustering and Schedules
By Bradley Flansbaum
December 17, 2019 |

3
Two notable hospitalist studies out late last month–one from JAMA, and the other from JHM. First up: Association of the Work Schedules of Hospitalists with Patient Outcomes of Hospitalization In this cohort study of 3 years of Medicare data from 229 hospitals in TX, covering 114K medical admissions of patients with a 3-day to 6-day […]
Read More