How Much Does the ABIM’s MOC Program Really Cost?

Our esteemed “The Hospital Leader” editor, newly minted Master in Hospital Medicine, and all-around big shot, Dr. Brad Flansbaum, and I are both recertifying for the ABIM Boards and we have both elected to take the Focused Practice in Hospital Medicine exam this year. As such, we are both very invested in the goings on in the ABIM,

especially since they increased the requirements for recertification in 2014 and have slowly, kinda, sorta backtracked in the face of vigorous criticism. Every few weeks Flansbaum and I end up discussing the hot events around this topic, or more often our own tedious progress in studying for the exam.

In our last conversation, Dr. Flansbaum pointed me to a recently published article from the Annals of Internal Medicine, “A Cost Analysis of the American Board of Internal Medicine’s Maintenance of Certification Program.” Now this is my kind of study—basically a back of the napkin exercise on steroids.

The authors, Sandhu, Dudley and Kazi, all out of the Bay Area, crunched some numbers, some estimated (like how much time physicians will spend preparing for MOC activities) and others exact (like the price of exams and modules) and came up with cost estimates for the ABIM’s MOC program.

They say that, on an individual basis, internists will spend an average of $23,607 in MOC costs over the ten year cycle of the program. 90% of those costs come in the form of time costs.

In aggregate, they estimate that the 2015 version of MOC will cost all internists in the US $5.7 billion over the ten year cycle.

As you recall from previous posts here, here, and here and from the frequent letters from Dr. Baron and co. at the ABIM, the MOC process changed in 2014 to double the number of points required from 100 every 10 years to 100 every 5 years. While some details around how to earn those points have changed in reaction to the furor brought about from the changes, the ABIM has still maintained the same basic structure of double the points. The paper estimates that this raised the costs for the country by $1.2 billion additional over the 2013 less demanding (but still pretty demanding) cycle. 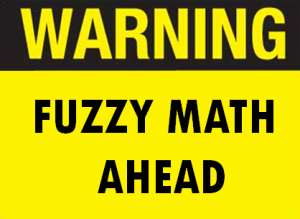 Any back of the napkin calculation is only as good as its estimates. I found this paper pretty solid in its educated guesses in all areas save one, but it was a big one. They used an average of 12.5 hours per year in completing the MOC knowledge modules. Hard to argue with that figure. However, for the year surrounding the secure exam, they give an estimate of 42 hours (triple the 12.5 hours plus the time to take the exam). Yes, only 42 hours!

Flabbergasted by this low figure, I embarked on creating my own estimate of the time to study for the exam and independently asked my fellow test-taker, Dr. Flansbaum how much time he was spending studying. We both started studying seriously 12 weeks out from the exam. We are both estimating 60-90 minutes per day with much longer study sessions on the weekend, minus an occasional day where we just couldn’t hit the books. We came up with numbers closer to 150 hours. Now that is an “n” of 2 old guys recertifying for the second time but I think it is much closer to reality than the 42 hour assumption in the paper.

If we now add the 12.5 hours for each of the other nine years of the cycle, we come up with a new back of the napkin total of 262 hours. Using the latest SHM/MGMA survey data to get both salary and benefits, the time cost for a hospitalist in 2015 is approximately $165/hour. Now add in the costs of the exams themselves— in this case $2060 for the Focused Practice in Hospital Medicine exam. The knowledge module costs are wildly variable. I paid $50 to complete two modules at a CME recently and then $250 at another CME event. Let’s say an average of $100 for each of 8 modules (remember the test itself counts as 20 points). That gives us a grand total of around $46,000 for a hospitalist in 2015 dollars. Of course this is a ten year cycle and we know that 73% of folks study for the ten year exam all in the last year of the cycle. The $165 figure of 2015, assuming 3% per year growth, would be worth $215.3 per hour in 2025. The MOC time cost will grow too.

So my Kealey unofficial back of the napkin figure is closer to $60,000 for a hospitalist beginning the cycle this year. I can’t even begin to apply that figure to their estimate for all internists in the country, but lets just say that we are applying only to hospitalists. There are 45,000 hospitalists in the U.S. now by all reasonable estimates. Each one of those will be doing the cycle over the next ten years, some who are taking the test this year are on the cheaper end and some taking the test in ten years are on the more expensive end. If we choose the midpoint between $46,000 and $60,000 we would have an average figure of $53,000 per hospitalist X 45,000 hospitalists.

$2.38 billion to certify all hospitalists in the U.S. over the next ten years!

There is some hope on the horizon (or is there?). The American Board of Anesthesia has just announced it is killing off the every ten year secured exam! Replacing it will be a new program that electronically sends out 30 questions per quarter for ten years. The ten year program costs the same as the current test, $2,100. On the surface this sounds great! It does seem to be a vast improvement over the ten year test cycle, especially in eliminating the binge purge cycle of the ten year exam. Unfortunately, it fails the Kealey analysis for affordability and here is why:

Our current IM MOC knowledge modules are 30 questions and if we use the previously estimated 12.5 hours to complete, that comes out to 25 minutes per question to read the question, look up the latest literature, answer the question, and process the paperwork around it. Let’s assume this new process is twice as efficient and only takes 12.5 minutes per question to answer these questions coming to your inbox. Then we have 30 questions X 4 quarters/year X 10 years X 12.5 minutes divided by 60 minutes/hr which gives us a result of 250 hours. This is basically the same cost to the system and same cost to individual hospitalists as now, but just in smaller more manageable bites, and that’s assuming double the efficiency of our current MOC questions. At the same efficiency as today’s MOC modules, we are looking at doubling the cost/time burden to the healthcare system.

Don’t get me wrong, I do like this new approach that Anesthesia is taking much better and feel, if ever adopted by ABIM, would help hospitalists stay at the leading edge of medicine much better than the current system, but an analysis still needs to be conducted on whatever system is continued or created anew as to whether it truly creates better docs and whether it truly makes care affordable for our patients.

After all, there is no free lunch, right?  There must be some cost to keep physicians educated, updated, and practicing at the top of their game.

Who is looking at this?  Where is the research showing the benefits to the current system for those large costs we and the system are paying? As the requirements and systems evolve for evaluating physicians (as Anesthesia is boldly doing!) who is looking to see that the system is better?

The real question, as with everything we do today in healthcare, is what is the value?