How Often Do You Ask This (Ineffective) Question?

How often do we get complacent with knowledge?  We hear the same thing over and over, and the message becomes lore.  Drink eight ounces of water per day or turkey makes you drowsy—not only do we as docs believe it but we tell family members and patients the same.

I came across a new study in CMAJ that fractures another piece of lore we hold fast. And not only should this study put the kibosh on it, but also upends a practice (a patient question) that teachers from eons past have instructed us to use over and over and over.  The question has intuitive appeal, is easy to gestalt, and has a universal understanding.  Non-physicians and laypeople can grasp what the answer implies without any difficulty.

What is the question?

“Would I be surprised if this patient died in the next 12 months?”

The investigators performed a meta-analysis on the literature base examining the predictive ability of the above question.

Not so great.  Further, the studies were of low to moderate quality.

I found the paper and results eye-opening.  Most physician checklists include this question, and doctors believe it to be valid. CMS also proffers its use in green-lighting hospice benefits. But based on the findings of the review–and its all the evidence we got, we must recalibrate our routine and enlighten those who ask us to inquire.  We may retrench if future studies appear proving some utility to the practice. But for now, we need purge the habit. The query’s  powers to foretell are insufficient. 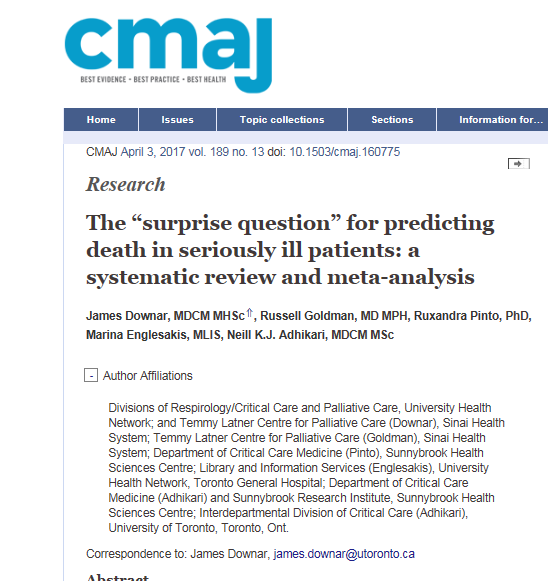