You probably heard the news about the hopeful vaccine and the Phase I preliminary findings (catch the subject line).

Keep in mind, most Phase one trials flame out before they get to Phase IV. Vaccines are one of those subjects I take for granted until I recertify for the boards. I know the basics, but because they are one and done affairs and often pediatric-driven, I tend to avoid reading about them. That same reason is why most pharma companies have abandoned ship on development. One-and-done therapies do not produce recurring profits, and any risks of adverse events are not worth the headaches (although the National Vaccine Injury Compensation Program puts most of the uncertainties in the lap of the federal government).

The COVID pandemic has rekindled the interest of pharma, however, and the race to the vaccine cure is ongoing. Given the black eye the biopharmaceutical sector has carried the past decade or two (public opinion polls are not kind), a breakthrough would not only fill their coffers, but it would also allow them to capitalize on the halo of goodwill you can bet will follow. Good incentives.

There are loads of companies with dozens of candidate vaccines in the pipeline, and date of delivery is TBD. Frontline health workers will be first in line to get them regardless, but I would not speculate on anything before January based on well-known virologists who have written on the subject.

So, for review, what are the vaccine types? Excellent question. There are five hopeful categories: 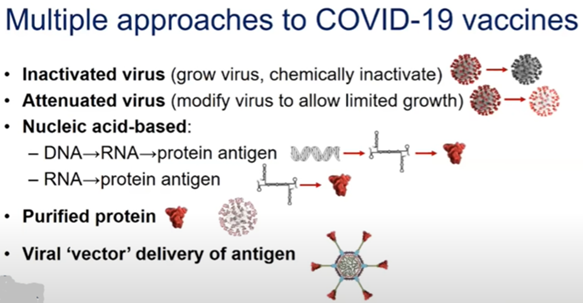 I put an asterisk next to #3 because everything you read about the successful vaccine reference that category as contender numero uno (RNA>>DNA). Safety and efficacy are a black box as we have not used a vaccine like these before. Here is why the focus is on them and where the promise of the Moderna compound lies:

Again, given the time it takes to assess efficacy and safety, as well as the ramp-up rate needed to manufacture and distribute the vaccine, even with the most optimistic scenarios given where development is at present, we will not see anything grand scale until 2021 (despite the boasts of non-scientists).

As far as the cost? Given the economy is falling behind by the billions daily, how about whatever it takes? This is an instance where society must reward innovation – even if it means our tax dollars and not private investment played a role in bringing a compound to market. Prices paid today gets us what we might need tomorrow (oversimplified, but you get the idea). We should not pay pennies on the dollar for a compound with close to infinite value. But you can bet many, including me, will ask how much of the societal benefit should the victor capture.

What the Heck Is an Adaptive Trial and Why Should You Care? Hint: COVID
By Bradley Flansbaum
June 22, 2020 |

1
The kids are navigating the crisis with maturity and aplomb and way too much “Clash Royale.” Online school somehow went through the wash and has shrunk to 3 hours, including lunch. They continue to seek ways to fill up the day. We’ve tried to set some clear goals, pulled out the QI toolkit and made […]
Read More
The Plague of Racism in Our Society & Our Commitment to Do Better
By Jordan Messler
June 8, 2020 |

5
Here we are, faced with history in real time. A plague upon a plague. A new one and a longstanding one. COVID-19 and racial injustice. Both are plagues upon our medical house, and it’s time for some spring cleaning. Initially, COVID-19 concerns brought news of an infection coming for anyone and everyone. Like the Black […]
Read More