If you have given any thought to corporatized medicine and its impact on medical practice, I advise you to read this extended New York Times piece:

The story concerns the contentious relationship between a hospitalist group and their employer, PeaceHealth Sacred Heart Medical Center in Springfield, Oregon.  The group alleges the hospital made advances to replace them on account of their suboptimal performance–both financial and professional.  Sacred Heart put out bids to national companies to outsource their inpatient line of business.  However, their plan did not move forward due to significant physician backlash. Feeling vulnerable, the docs chose to join a union and hitched with the American Federation of Teachers, which already represented nurses at Sacred Heart.

Negotiations continue, and the article concludes with an ambiguous tone: pay, hours, and performance swirl together in a he said, she said lingering dispute.

Given the climate we work in today, you should not put the piece aside without considering where you stand on the group’s choices.  Threats of corporate takeover, greater regulatory oversight, hospital downsizing, and subsidized salaries make hospital employment a vulnerable target for disruption.  No one feels secure.  While we are all sympathetic to the little guy, and that includes me (I am one), the healthcare realm has many points of view.  Depending on geography, culture, and market performance, those points of view will vary.

A few comments on the article.

For one, the writer has sympathy for the hospitalists and the piece skews heavily in their favor.  He renders the conflict more David versus Goliath rather than two “equal” parties seeking to adjudicate differences.  We do not get much in the way of metrics and what the hospital expects, nor what the physicians deliver.  To pass judgment, I would have liked more data.  Further, we only meet a handful of the principals and more individual accounts of what transpired would lend additional substance to the story (I’m sure space restrictions limited comments).

It’s hard not to side with the hospitalists–especially being one, but I wanted to approach the disagreement with a more objective lens.  It just was not there.  The hospital was also non-revealing, and they did not disclose details on what they foresaw the inpatient overhaul accomplishing beyond usual platitudes.

In evaluating the many remarks left by readers, however, most parallel the one below–and likely reveal the collective sentiment of the public: 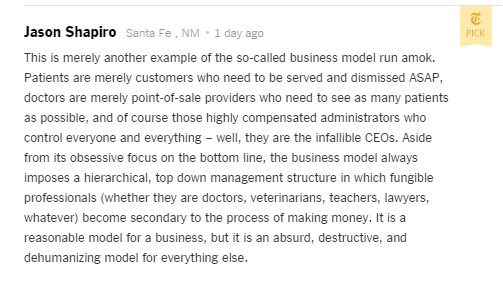 Offer up physicians and big bad acute facilities, and you can bet who will prevail.  While most folks value their local hospital–and indeed they sit way atop MCOs, pharma, and DME manufacturers on the lovability scale, they still value their caregivers more. Take your case to the people and present an unsympathetic corporate parent and odds are, you can predict the victor and the vanquished. Need proof?  Here’s the 2015 Gallop Poll on the most trusted professions in America: 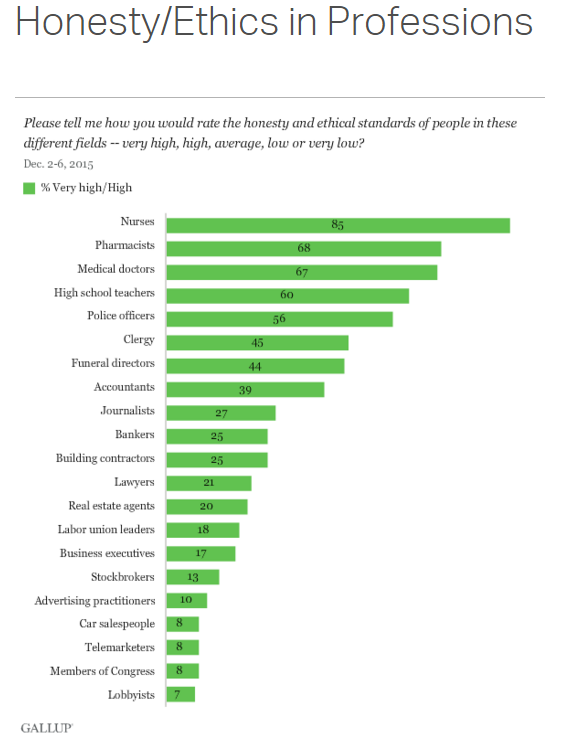 Within the public consciousness, health personnel, despite their wrinkles, are still held in the highest esteem. The tone of the article and response of readers, again, do not surprise me and are consistent with long-held views.

The article also does not explore the nuances of forming a doctor’s union and the difficulties it might solve (or create).  I am no expert, but:

The list could lengthen, and the issue of whether doctors should unionize requires more expertise than I possess.  It’s a black box to me, and I have more questions than answers.  But the piece offers a starting point and gets us to imagine a future none of us now envision.

Ask yourself, what would you say if a colleague asked you to join a union? That’s as a good a step one as I could imagine.

I would also be remiss if I didn’t reproduce a small portion of the article detailing the breadth of “skin in the game” and what the term implies. It’s a gem and encapsulates what I have believed for years. If hospitals want team-based care but with doctor-based liability, they need to rethink their cliched statements on value and mission:

The conversation turned, inevitably, to the dreaded “skin in the game.” I wanted to know what, exactly, they considered so offensive about having a financial stake in the hospital’s performance.

Dr. Schwartz responded by recounting the first time he had heard the expression, at a meeting with the hospital’s board of directors. A local businessman on the board had used the phrase while emphasizing the importance of providing the proper incentives for the doctors.

“It really took all of my self-control to not say, ‘What the hell do you mean skin in the game?’” he said. “We have our licenses, our livelihoods, our professions. Every single time we walk up to a patient, everything is on the line.”

Why all our current efforts to cut waste won’t save money after all
By Chris Moriates
February 11, 2020 |

1
I am feeling discouraged. Actually, I am pretty frustrated. I truly believed that if we could “choose wisely” and cut out the nearly $1 trillion of waste in health care that we would make a real dent in costs in health care. Not only that, I even thought that decreasing these total costs of care […]
Read More
Hospital Medicine Has a Specialty Code. Is the Memo Still in the Mail?
By Bradley Flansbaum
September 24, 2019 |

0
Look up from your stack of journals lately? You will note DNA analysis has gotten awfully popular. Mom, dad, and the rest of the clan want in and the temptation to obtain the blueprint that makes you, you has an almost hypnotic-like draw. You are curious if what grandma told you—half of your “G, C, […]
Read More
Trustworthy Individual Performance Measures? Show Them To Me.
By Bradley Flansbaum
June 10, 2019 |

0
Public and private payers incentivizing providers (P4P) to coax desired clinical behaviors have failed. Both CMS derived measures and those used by commercial insurers, many of which overlap, fail to pass Good Housekeeping standards and lack the reliable characteristics indicators must possess. Whether those indicators are valid, attributable, or meaningful makes all the difference in […]
Read More