The Artist Arrived First: Anatomy and Art in Italy

Life is short, the art is long.

Our pivotal moments today are holding warm hands and discussing issues of survival and comfort. And yet, the journey into medicine began with cold fingers and deciding which tortuous tool to use next.

The medical school told us, “We trust you, you are now on the path to becoming a physician. But we trust you only so far as to start your education with a patient who doesn’t talk back.”

But this patient, our first patient, was alive with secrets and hidden beauty and we were granted a unique opportunity to unlock the “mysteries within.”

The cold cadaver on the table, the chemical miasma, the cold air, and the jars of congenital malformation specimens lining the shelves on the walls: anatomy lab seems anything but beautiful. It’s a ritual rooted in hundreds of years of medical education, and a journey in the search for truth and beauty within the human body.

This past month, on an Italian adventure, as we explored the small town of Orvieto, I was reminded of the days poring over Netter. Orvieto on the way to Florence, and 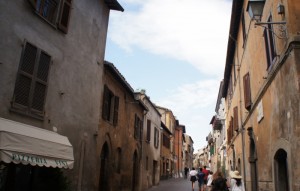 historically was an outpost on the road from Roma to Firenze. A city carved into volcanic rock, it sits upon ancient Etruscan tunnels and caves. To get to the top of the medieval hilltop town, we skipped the long hike and took the cable car to the city center. From there, we meandered through narrowed ancient streets racing with Fiats, travelers with backpacks, and locals on bicycles. Cobblestoned walkways led past beckoning small shops, but our mission was the cathedral. No time for shopping or cafes when we travelled as scholars. 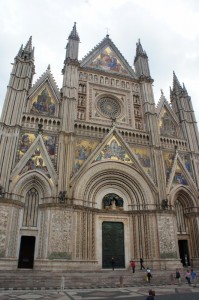 The pathways narrowed, closed in, and the steps up the hill harder and harder, but our walk was rewarded with the grand cathedral, built in the 14th century. It barely fit in the frame through the side streets, but arrived in view after one last turn, with a grandeur that brought pilgrims to their knees centuries ago.

The cable car, the hike, and the cathedral all led to the one work of art inside that was our focus: the frescoes lining the chapel of San Brizio, the Signorelli chapel.

Signorelli’s frescoes, painted in the late 1400’s tell the story of the Last Judgement, and through this story of the end of times, beauty emerges. Michelangelo is reported to have sat here as we did to study Signorelli. In one of the panels, human forms claw out of the earth, writhing, pushing themselves through the ground, to emerge and therefore be reborn. The skeletal figures seem alive, posing, talking, moving. Other figures are partially clothed only in their musculature.

The striking features of the skeletons are that these are anatomically correct figures, the first of its kind. Skeletons prior had missing bones, sternum all connected, a misaligned jaw. Signorelli represented the truth for the first time. Prior to this moment, physicians, surgeons, an anatomists, artists, all erred in their depiction of the human body. 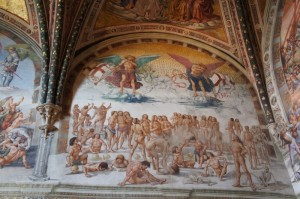 Before physicians dissected humans, the artist sought the truth first. Signorelli did his own dissections. Not in the name of science, but in the name of art. Anatomically correct drawings were a rarity. Artists using Galen’s work to depict human anatomy were working with medically incorrect details.

Galen is remembered as one of the greatest physicians, after Hippocrates,  because he was a grand self-promoter, and he wrote. Volumes of his texts survived, and were the definitive medical works for centuries. This was defined as the era of book medicine, or library medicine, with the word of Galen being the word of the medical god, and no one “seeing” for themselves. That is, until Vesalius. Vesalius, the Flemish anatomist, was one of the earliest to demonstrate that Galen used animal dissections to describe human anatomy. But Vesalius was in 1543. Signorelli was 50 years earlier, Galen 1000 years earlier. The artist was seeing for himself first, the artist led the way. The artist searching for truth unveiled the beauty of the human body. Beauty was the goal, and 500 years later we were staring at a Renaissance masterpiece.

The only thing we knew about our cadaver was that he was a physicist. We named him Einstein. We started slowly on him, without much skill. The first weeks were a struggle to find the hidden nerves and veins, lymph nodes and tendons. They were being uncovered, but more often than not overlooked or accidentally sliced out of the way.

Seeing for yourself is key, as we learned about the grand diversity of the human body. We would venture to other anatomy tables that would uncover secrets, an extra rib, and unnamed vessel, a hidden cancer.

I reached the neck and the axilla by the end of the course, one of the most challenging areas. The hidden layers were slowly exposed, each part found, labeled, and displayed. Our dissection of this area became the model for others to study and learn from. It was a work of art, not simply the dissection, but the intricate interplay of all the pieces of the body with their precise places and perfect proportions.

By the end of anatomy lab, I found the beauty within.

I thanked Einstein for unveiling his secrets.

The artist came first. The artist’s eye can help in the search for beauty, for truth, and the notion of seeing for ourselves. Through this we discover the voice of the artist and an appreciation for art, for the body as a work of art, and we begin to unravel each work of art that beseeches us to uncover their mystery every day.