The Next Step In Transparency With Our Patients

HPI: The patient is a 54yo very obese depressed man with history of drug abuse, non-compliance with meds, and possibly undiagnosed OSA readmitted today for pain control after claiming to have “run out” of his opiates after discharge from the hospital AMA 2 days ago following knee surgery.

Have you ever written like this in your patient notes?

Since the Health Insurance Portability and Accountability Act (HIPPA) was passed in 1996 – and even long before that – patients have had the ability to request to see and read their medical records. In the era of defensive medicine, we have been asked to imagine the plaintiff’s lawyer sitting on our shoulder and reading whatever we write in the medical record. It hasn’t been stressed nearly as much to imagine our patients sitting on that other shoulder, and with good reason. In actuality, it was a pretty rare event for patients to see what you were writing about them.

Over the past decade, many organizations have made great strides in increasing transparency and interactivity with their patients, especially as patient portals have become more common in today’s EHRs. These portals make it easy to release lab studies to patients in real time, schedule appointments, and gain access to vaccination records. Actual care notes have usually not been a part of this trend, however.

Of course, there were a few early pioneers who actually encouraged patients to read their notes even before the widespread adoption of EHRs, like our SHM co-founder John Nelson,  who was writing back in 2006 about his practice, several years on at that time, of dictating and handing discharge summaries to patients as they were leaving the hospital.

In 2010, the Robert Wood Johnson Foundation funded a three institution study (Geisinger, UW Harborview Medical Center, Beth Israel Deaconess) with over 19,000 patients looking at the effects of sharing doctors’ notes with those patients. They published their results in the Annals of Internal Medicine in October 2012, “Inviting Patients to Read Their Doctors’ Notes: A Quasi-experimental Study and a Look Ahead.”  In the study, patients were sent a link via their secure EHR portal, inviting them to view their primary care provider’s signed notes. No retroactive viewing was part of the study – only those notes written after the start of the study. Doctors and patients completed surveys before and after about the process.

In pre-surveys, physicians’ main concerns were over changes in their workflow, like longer visits, spending more time writing and editing their notes, addressing questions from patients and changing their documentation. After the study, the doctors’ survey showed that their concerns about a disruptive workflow were largely unfounded. With regards to documentation, the concerns centered on how they would address sensitive topics, like cancer, mental health issues, substance abuse and obesity. Post-study surveys showed that these indeed required some modifications to how doctors documented, but the impact was smaller than anticipated.

What did patients themselves think? Analyzing their survey data showed that they better understood their health and medical conditions, they remembered the plan for care better, and as a result they said they took better care of themselves.

At the end of it all, after a year of having OpenNotes, there was still a fair amount of doctors who said that they would rather not share their notes (17%-26%), but when offered the choice to actually turn off this function, none of them opted for this.

Since then, all three organizations have expanded their use of OpenNotes. The idea has continued to spread, too. OpenNotes has now expanded beyond the study phase and now has a full-fledged organization and website (www.opennotes.org) promoting the idea. Dozens of systems around the country are either in full implementation or in the planning and rollout phases. 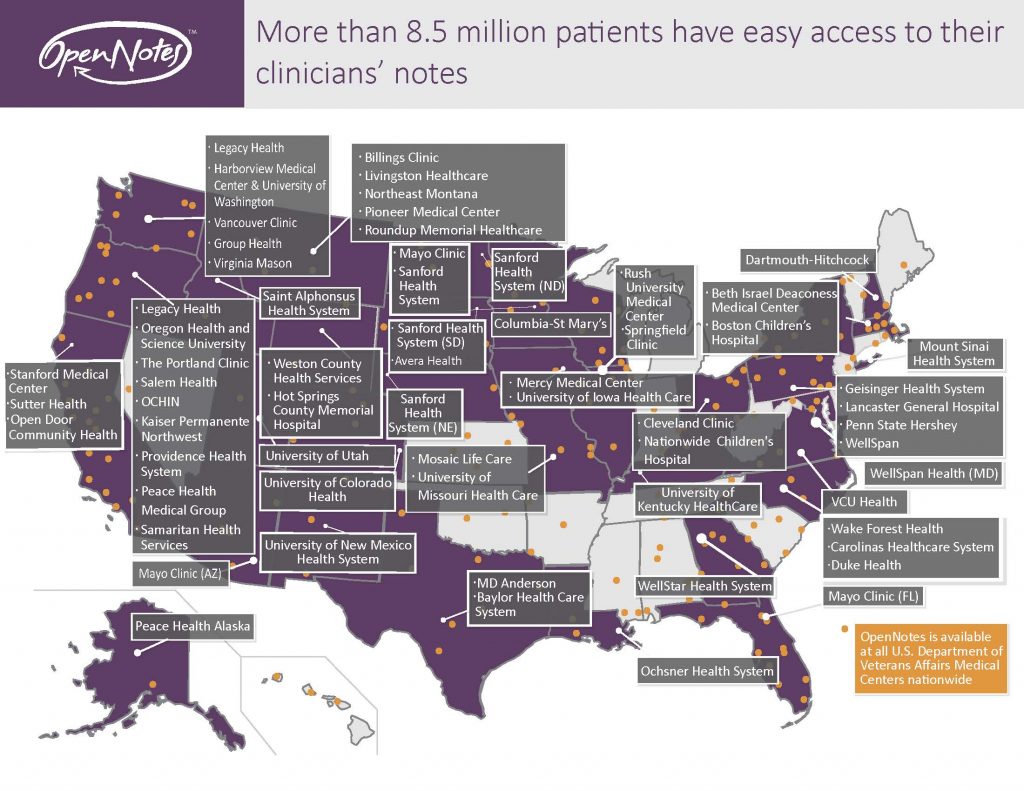 While today it is more common to do this in the outpatient world, some organizations are using open notes in the inpatient setting too. We as hospitalists can expect to start sharing our notes more readily with our patients as this idea takes off.

Here are some tips from the website on how to approach your documentation in a more patient sensitive manner.

1. Avoid jargon and abbreviations
2. Simplify terms
3. Incorporate lab and test results to give a full picture
4. Use non-judgmental terms and highlight patient strengths

So, let’s circle back to the example of common language in use today in notes that I gave at the beginning:

The patient is a 54yo very obese depressed man with history of drug abuse, non-compliance with meds, and possibly undiagnosed OSA readmitted today for pain control after claiming to have “run out” of his opiates after discharge from the hospital AMA 2 days ago following knee surgery.

Incorporating the tips from Opennotes:

Mr. Devlin is a 54-year-old man who has battled depression, drug use, and his weight for years. He left the hospital 2 days ago against the advice of his care team following knee surgery. He had strong concerns about the effectiveness of pain control in the hospital. He was given a script for Percocet at discharge but still was unable to obtain pain relief and now he is back for reevaluation.

So, now you have seen how it would technically work. But to me, there is still much to be studied and learned, especially about how it would work well in the inpatient setting. Do we risk inundating a patient or family with the rapid, frequent and sometimes repetitive nature of hospital documentation? Should this focus on discharge summaries? New consults?

I am all for the concept here. As we have all been taught, “the patient record is the patient’s record,” even though we usually treat it as our property. How do we open it up and make it more accessible to our patients so that they better understand what is happening around and to them, but also give them all the information they need in real time to better participate in their care?

I would love to hear from any of you who currently use OpenNotes in your hospital. Please tell us about your experiences in the comments section below.

Economy or Humanity? Thoughts on How the Pandemic will Impact the Healthcare Industry
By Sowmya Kanikkannan
April 15, 2020 |

1
Not enough ventilators, a profound lack of personal protective equipment (PPE) and overwhelmed healthcare professionals. Hospitals and systems stretched beyond capacity in the hardest hit states. Routine care ground to a halt. COVID-19 has pushed the US healthcare system to its limit and exposed its fragility. It’s not a big secret that the US healthcare […]
Read More
Physician Leadership in a Time of Crisis: A Conversation with Lt. General Mark Hertling
By Charlie Wray
April 14, 2020 |

0
Like the vast majority of you, I never thought I’d ever experience or be a part of a pandemic. A month ago, if you’d have told me we’d be where we’re at right now, I’d have thought you were crazy. Yet here we are. The vast majority of the nation is on self-quarantine, hospitals around […]
Read More
COVID-19 Practice Resources for Hospitalists
By Tahir Mehmood, MD & Meltiady Issa, MD, MBA, FACP, SFHM
March 23, 2020 |

1
COVID-19 has posed a great challenge for healthcare workers to provide safe, uncompromised care. At our institution, the Mayo Clinic in Rochester, MN, we have created a command center as the main source of information about the virus and logistic planning. This gets updated frequently as more details surface and is communicated to all members […]
Read More