This Month’s #JHMChat: What Role Does Defensive Medicine Play in Resource Utilization?

“One-out-of-three”. I’m going to say that one more time: “One-out-of-three”. That’s the amount of medical resources that a group of surveyed hospitalists believe is used toward defensive medicine. Can you think of any other aspect of your life in which 1/3 of your decisions are made, not to optimize the outcome, but “just to be safe…”? 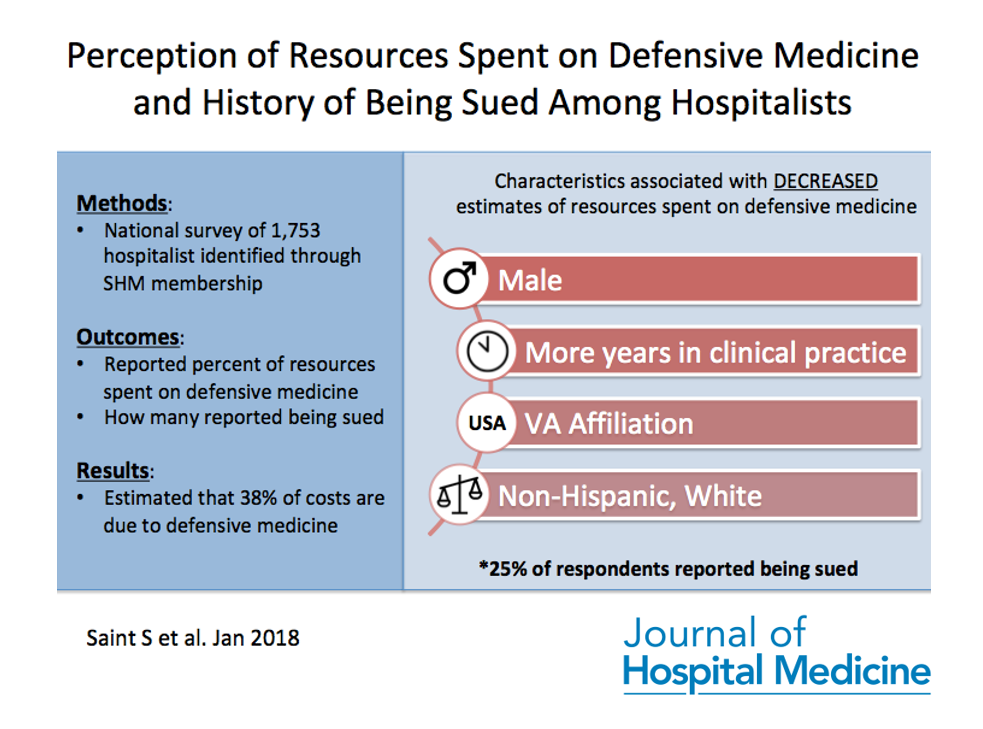 While not frequently reported in hospital medicine literature, this topic remains highly salient as it affects the health care system to the tune of ~$56 billion dollars/year! Even if you’ve never been the subject of a malpractice lawsuit, this study begins to explore how the simple threat of litigation may influence your ordering patterns. Some other food for thought:

There’s certainly a lot more to unpack on this subject, and we’d love to hear your thoughts and experiences. Join my colleague Vineet Arora, MD (@FutureDocs) with guest authors: Sanjay Saint, MD (@sanjaysaint), Vineet Chopra, MD (@vineet_chopra) and Allen Kachalia, MD, JD (@allenkachalia) on Monday, February 26th at 9PM ET where we will discuss “Perception of Resources Spent on Defensive Medicine and History of Being Sued Among Hospitalists: Results from a National Survey”

Not familiar with #JHMChat? Since October 2015, JHM has reviewed and discussed more than two dozen articles with many focusing on improving the value and quality of care we provide to hospitalized patients. Medical students, residents and practicing hospitalists are encouraged to join, as we discuss a broad array of topics that affect the care of the hospitalized patient. It’s a great opportunity to meet others, learn and even earn free CME.

To participate, just type “#JHMChat” in the search box on the top right corner of your Twitter face page, click on the “Latest” tab at the top left of the page and join the conversation.

About the Author: Charlie Wray

Charlie M. Wray DO, MS is an Assistant Professor of Medicine at the University of California, Francisco (UCSF) and the San Francisco VA Medical Center. He completed medical school at Western University – College of Osteopathic Medicine, Internal Medicine residency at Loma Linda University, and a Hospital Medicine Research Fellowship at The University of Chicago. Dr. Wray’s research interests have focused on inpatient care transitions and care fragmentation in the hospital setting, overutilization of hospital resources, and the use of telemedicine to improve care for socially-vulnerable patients. Additionally, Dr. Wray is an Associate Editor and Digital Media Editor for the Journal of Hospital Medicine (JHM) – where he helped establish the use of Visual Abstracts and the Twitter-based journal club; JHMChat. Dr. Wray is also the Director of the newly developed JHM Editorial Fellowship. When not fulfilling these duties, Dr. Wray can often be found tweeting at @WrayCharles or trying to keep up with his two young boys.

Both Sides of the Bedrail: Bringing patients and hospitalists together to better understand the hospitalized patients’ experience
By Charlie Wray
December 12, 2019 |

0
Do you have a stack of journals piling up on your desk, beside your bed or in your email inbox? In 1950, medical knowledge was estimated to double every 50 years, but now the doubling time is every few months. At this rate, it is impossible to keep up with the literature, but a group […]
Read More
The QI Pipeline Supported by SHM’s Student Scholar Grant Program
By Guest Post
October 28, 2019 |

0
By: Emily Gottenborg, MD and Ashley Duckett, MD As fall arrives, new interns are rapidly gaining clinical confidence, and residency recruitment season is ramping up. It’s also time to announce the opening of the SHM Student Hospitalist Scholar Grant Program applications; we are now recruiting our sixth group of scholars for the summer and longitudinal […]
Read More