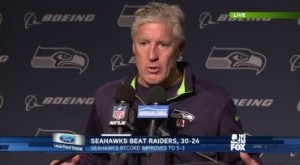 I saw this in my inbox this week and immediately I thought it must be from Pete Carroll, coach of the Super Bowl losing Seattle Seahawks, apologizing for one of the stupidest calls ever in the history of coaching. His call was to throw the ball from the 1 yard line instead of punch into the end zone behind their thundering “Beastmode” running back, Marshawn Lynch. You all saw what happened. The ball was intercepted, essentially ending the game and preserving a harrowing victory for the New England Patriots in Super Bowl XLIX. 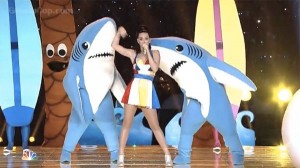 Or, maybe it was from Left Shark. Left Shark was Katy Perry’s bumbling dancer in an otherwise shining Super Bowl half-time show for the ages. Left Shark looked as if he was having trouble remembering his routine. Right Shark and Katy were crisp and sharp and made Left Shark look very, very bad.

But, alas I opened it up and saw that it was from the ABIM and its President and CEO, Dr. Richard Baron. 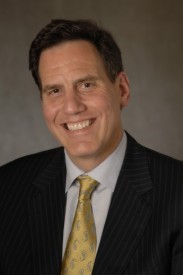 Another in a string of retreats from The Great MOC Overreach of 2014 in which the ABIM overhauled its system of doing Maintenance of Certification (MOC) from an every ten year process to an every two years process. Moreover, additional complexity was added to an already complex process by layering Patient Safety and Patient Voice requirements on top of the Medical Knowledge requirements and the Practice Improvement Modules. To add insult, through some unfortunate wording, the ABIM appeared to take a condescending stance to many of the physicians who had participated in their process over the years. Any physician already board certified, but either grandfathered or not yet signed up for the more rigorous MOC, was publicly called out with the statement on the website following their name, “Certified, not meeting MOC requirements.” Finally, the ABIM’s main argument against those speaking up was how many thousands of doctors were enrolled in the process clearly supporting what ABIM was doing. Of course, everyone knew that there was no show of support, because a decision not to board certify usually is a decision not to have a job.

The result of this was that over 25,000 physicians signed petitions protesting the changes and the costs in dollars, time, hassle, and respect that the new process brought about. All of the major specialty societies in the house of medicine either wrote lengthy letters to the ABIM supporting their members and/or sent delegates to an urgently assembled ABIM summit, July 15, 2014, in Philadelphia (I was there as your SHM representative.)

The result of this was the first halting steps back (or forward?) by the ABIM. In this letter dated July 28, 2014 the ABIM acknowledged that its timing for the changes wasn’t optimal given the monumental amount of change already occurring in healthcare around technology adoption, the patient safety and quality movement, and the affordable care act, among others.

The ABIM offered up some improvements such as allowing specialty societies an easier time in creating and submitting their own MOC modules, lowering retake fees, and a promise to look at the language they were using to classify those enrolled, or not enrolled, in the process. But at this point they decided to double down and keep the overall new MOC structure intact. The every-two-year reporting requirement was maintained, as well as the 100 points in the four buckets of Patient Safety, Patient Voice (renamed from Patient Survey), Medical Knowledge, and Practice Assessment.

Not surprisingly, this offering of positive, but minimally impacting, change didn’t mollify the crowd.

More recently, on January 8, the NEJM published a Perspective piece, by Dr. Paul Tierstein, the Chief of Cardiology at Scripps, called, “Boarded to Death — Why Maintenance of Certification Is Bad for Doctors and Patients.” Dr. Teirstein started the first online petition against the ABIM last year and his new article reiterates most of the earlier arguments put out by his and many other voices for why, in their view, the process is unsupported and potentially corrupt , mostly having to do with ambiguous MOC outcomes research, the silent coercion for fear of losing employment by practicing physicians, and the need for ABIM as a huge money-making enterprise to keep feeding its appetite for physician fees.

About this time, I was also told about the launch of an alternative board organization by a group of prominent physicians, including the aforementioned Dr. Teirstein. The new organization is called National Board of Physicians and Surgeons (NBPAS) and when perusing their website, it appears their focus is on lower fees and recognizing specialty–focused CME (50 hours per 2 years) for those previously certified by an ABMS board. This group is launching with many specialties on their roster of recognition, but alas, no hospitalists. Where is the love, NBPAS?

Anyway, this is a small grassroots effort clearly in response to the ABMS and ABIM’s new changes. Who knows where it will lead? But they must feel pretty proud to see a letter like this show up in their inbox, especially to see the ABIM coopting their CME strategy.

So, for now at least, the ABIM process is still an every-two-year reporting process and still requires obtaining 100 points. The Patient Voice, Patient Safety, and Practice Assessment modules are still available, but no longer required for the next two years until the issue can be studied more. They will be re-looking at how the secure exam will look as soon as Fall 2015. Will we see an open book/computer exam? You know, like real life. And finally, the language specifying someone’s status in the process will become the more neutral and less judgmental phrase, “participating in MOC.”

But what about hospitalists? How does all of this relate to us? As many of you know from my last post,  I am recertifying this year and so I am paying special attention to the rapidly changing landscape. Above all, these missteps annoy me especially because our field of Hospital Medicine is really starting to take off with hospitalists entering the Focused Practice in Hospital Medicine pathway in record numbers. This self-declaration of our field and our scope of practice is critical in creating and affirming our identity as an important and identifiable field of medicine. Anything, like these missteps and backtracking by the ABIM that endangers our ability to show who we are and why we are needed, is something we must take very seriously.

The good news for hospitalists is that as a newer addition to the overall certification offerings of the ABIM, we have had great latitude in showing that there can be a better way going forward. The Focused Practice in Hospital Medicine (FPHM) secured exam is the first exam truly designed around the practicing clinician. Unlike the regular MOC exam, our questions did not come from the regular pool of rotating questions that populate the certifying exams targeted at recent graduates. Real practicing hospitalists wrote our questions for us from the point of view of what a hospitalist needs to know to do their job. The arcane trivia and zebra hunting have been purged.

To help you study for the exam the society has several new initiatives. Take a look at this. The organizers of Hospital Medicine 2015 (HM15) in Washington DC have published an MOC Roadmap focusing on all of the content during the meeting that will help you prepare for the secured exam, especially in the non-clinical areas like transitions, consultative management, palliative care, and quality/safety. This September, SHM will publish an exam-prep tool also focusing on the non-clinical aspects of the exam to make it even easier to focus your studying.

In regards to the earning of points for FPHM, even the portions of the certification process that have now been downgraded from mandatory status, like Patient Voice & Safety, are still available and able to be used for obtaining credit. I talked about the TEAM module in my last post as a good source of points for FPHM and good feedback on how you work with your hospital team. Additionally, HM15 is offering a pre-course which will have two modules that will count towards the Focused Practice in HM: SHM’s Hospital Medicine Quality Improvement & Patient Safety and ABIM’s Update in Hospital-Based Internal Medicine.

At this point I am in the FPMH pathway with over 3,000 fellow hospitalists. It looks like the process is getting simpler overall. As hospitalists, we are moving forward within the system and leading the way for change, just as we have been doing in all aspects of medicine for the last 20 years. Our numbers in FPHM are big now and will get huge and that is a very good thing.

So don’t let this rapid change and uncertainty dissuade you. I believe the process needs to change more, but I also believe that the Focused Practice in Hospital Medicine is vitally important to us and we as a society will remain heavily involved making the process as relevant as possible to you and helping you show your commitment to hospital medicine. When it’s your turn, sign up!

Anyway, what a week! The ABIM showing humility and contrition and even taking some things off the table… Hell, we even got an apology from Pete Carroll.

The opinions expressed here are all mine and not the policy or official stance of SHM.