A “Never Event” Happened to My Family Member. Don’t Let It Happen to You.

It is odd being on the other end of the doctor/patient interaction and having a surgeon calling me in the middle of the night apologizing for a mistake. I was scared and then I started to feel anger creeping in. How could this happen? Swiss cheese models and checklists danced in my brain. The analytical part of me was appreciative of the straight-forward manner the surgeon spoke to me, holding nothing back and owning up to the mistake, telling me the hospital would be investigating and assuring me that my family would incur no costs due to the error. He had performed an unnecessary abdominal surgery, a Never Event in the lexicon of patient safety.

As you may know, Never Events are loosely defined as events that should never happen.

The history of Never Events is rooted in the patient safety and quality revolution of the last two decades. In 1999 the Institute of Medicine produced its seminal report, To Err is Human: Building a Safer Health System. This report helped spur on the nascent patient safety and quality movement as it highlighted the dangers in our American healthcare system. Its most famous and oft quoted statistic was that 98,000 Americans per year were dying of medical errors. It really should be required reading for every hospitalist. I’ve linked here to the executive summary for you to peruse its findings and recommendations.

To Err is Human set off many ripples of change that overhauled how we evaluate and tackle patient safety and quality issues in this country. One such result was that Ken Kizer, CEO of the National Quality Forum (NQF), in 2001 introduced the concept of Never Events, medical errors so egregious that they simply should never happen. In 2002 the NQF introduced the first list of 27 Never Events.

In October 2004, I am proud to say, my company, HealthPartners, a large integrated delivery system and health insurer in the twin cities of Minnesota, was the first company in the country to publicly declare that Never Events were unacceptable and that these would no longer be paid for by our patients and their HealthPartners insurance. At the time, this proclamation was scoffed at with the local Minnesota Hospital Association representative claiming that this was merely a marketing ploy and would undermine efforts already underway to improve patient safety.

Well fortunately, this bold move was recognized for the important statement it was and others began to follow. In 2007-8 the Center for Medicare and Medicaid Services (CMS) began scaling back on payments in its Medicare and Medicaid programs for an abbreviated list of Never Events, which they called, “non-reimbursable serious hospital-acquired conditions”. And in 2011 the NQF updated its list of Never Events to the list of 29 used today including such things as wrong surgery, death from med error, death or serious injury from falls, etc.

The Leapfrog Group has weighed in and suggested five actions to be taken following a Never Event:

So what happened to my family member? 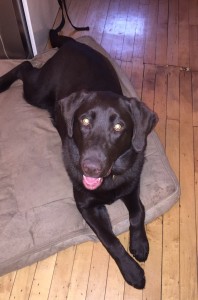 My 15 month old Chocolate Lab, Koby has been a notorious eater of foreign bodies since he was 5 months old. He will eat paper, legos, cardboard, but his favorite is socks. Often times he finds a sock laying around (and with 4 kids in the house there are plenty of opportunities for him to find one) and swallows it whole without us ever knowing.

Last week, he began to exhibit signs of a bowel obstruction, vomiting, drooling, and finally when we couldn’t get him to drink water, we took him in to the local animal emergency center. X-rays confirmed a socked-in (pun intended) obstruction. After conferring with the vet we agreed that this appeared to be unlikely to pass after 18 hours and that the surgeon should be called in. I left him in the hands of the staff and went home to await a call from the surgeon obtaining consent.

The surgeon called before surgery a few hours later and said he agreed this was the right thing to do after reviewing the films and was ready to proceed. He did a nice job of explaining the risks and benefits and possible complications. My physician brain took notice of everything he was doing right. He said he would call right after the surgery.

Two hours later at 1:30 in the morning I was called promptly after surgery to let me know that Koby was doing fine, but something unexpected had happened. I gulped. The surgeon opened up his belly and ran his bowels three times, but couldn’t find the blockage. He definitely saw signs of inflammation and luckily no signs of ischemia, but no foreign body either. He then asked the veterinary assistant to search the kennel area. The assistant went and found that Koby had indeed passed the sock (yes, it was a sock!). The hospital had a protocol to walk the dogs when possible before surgery and let them void. Somehow the technician had not noticed, or had not realized that having a bowel movement would change the course of care. The surgery should have never happened.

As I stated in the beginning, the surgeon did all the right things afterwards aligning perfectly with the Leapfrog group recommendations (although not sure that veterinary Hospitals have a reporting mechanism for safety events or never Event policy).

So far, Koby is recovering well, but there are definitely repercussions to having a “Wrong surgical or other invasive procedure performed on a patient”. He now has two weeks of wearing a cone, which he absolutely hates, two weeks of getting him to take pills, staying indoors and no running, and then the risk of dehiscence and infection. 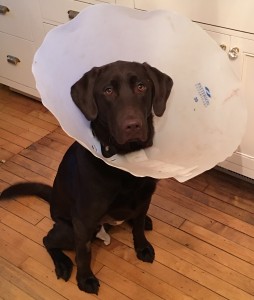 Never Events are called that for a reason. Most of the 29 are indeed things that should never happen, or at the very least should be, as CMS states, are “reasonably preventable by following evidence-based guidelines.”

Fortunately, our Never Event was with a pet, and so far he’s healing well. As hospitalists, we are involved in many ways with eliminating and decreasing these types of events for our patients. I will have a new outlook as I approach the daily work on improving quality and eliminating harm.

7
Don’t let my last name fool you. I am a middle-aged WASP, a privileged white woman. I have never thought of myself as particularly privileged. I grew up a U.S. military brat in a distinctly middle-class family. I’m not unusually smart, or wealthy, or talented, or beautiful. But it has never occurred to me to […]
Read More