A New Light in the Darkness: Using Hospital-Based Medication-Assisted Treatment to Tackle the Opioid Crisis

Alvin is a 42-year-old man who was never really given a chance. His parents both had severe alcohol use disorder. At age 12, his parents encouraged him to skip school to sell marijuana in order to fund their drinking. As his parents began using various illicit drugs, Alvin started selling larger amounts of marijuana to foot their bill. Eventually marijuana was not profitable enough. Alvin, then 16 years old, turned to crack cocaine. A year later, he was arrested with enough drugs in his possession to justify a criminal charge for dealing.

I met Alvin when he was admitted to complete six weeks of IV antibiotics for his third bout of endocarditis. His infection was being treated, but not the underlying disease. Perhaps addressing Alvin’s life-long struggle with drugs was a lost cause.

About two weeks into his hospitalization, he snuck out of the hospital and used heroin on the street. There was discussion among staff about discharging him against medical advice. That is likely what would have happened even a week earlier in our hospital. Instead, the nurse called a new team with developing expertise in opioid use disorders (OUD). That is how I met Alvin. He was pacing back and forth. Extremely nervous. Screaming at nurses. Tearful. Agitated. He kept repeating, “I need a fix. I’m just going to leave. I can’t stay.”

Our team discussed a new option with him, and initiated buprenorphine therapy.

Alvin made an incredibly positive turnaround in just a few short days. He was upbeat. Thinking about his future. Listening to music. Speaking about his troubled past. Wanting to do better for himself and his fiancé. 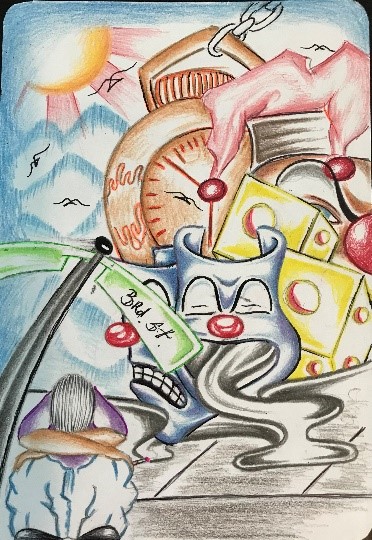 Alvin completed his entire inpatient medical treatment. Prior to discharge, he offered to draw our hospital staff a picture. It was suggested that he reflect on his life and how he felt before and after buprenorphine therapy. On the bottom left, Alvin sits on a street corner in despair. Moving counter-clockwise, Alvin drew the different masks of addiction since “every time you use you feel like a different person, and none of them are good.” A similar sentiment shared with dice, and a stopwatch representing all the time that has ticked away because of oxycodone and heroin. But at the top left, beaming with radiance through the darkness of addiction, a possible solution.

For Alvin, that’s buprenorphine. Based on his comorbidities, if he had left without completing therapy as he originally intended, he likely would have died.

So what is buprenorphine (more commonly known by its brand name, suboxone)? It is part of a therapy for OUD known as medication-assisted treatment (MAT). There is overwhelming scientific evidence that MAT with pharmacotherapy such as the buprenorphine that Alvin received is highly effective.

Prevention and treatment are the two primary approaches to decreasing morbidity and mortality in chronic medical diseases. The multitude of solutions suggested to remedy the opioid epidemic fall into one of these categories. Prevention efforts have led to an emphasis on safer prescribing practices and an increase in Prescription Drug Monitoring Programs, among others.

However, the impetus on preventing OUD has taken away the spotlight needed to discuss treatments such as MAT for patients like Alvin already suffering from this crippling disease. Efforts to decrease the amount of legal opioids in circulation has been met with unintended consequences by driving patients with opioid addiction to street drugs such as heroin and fentanyl, and potentially leading prescribers to undertreat those with legitimate need for opioid therapy.

It should not, and does not, have to be this way.

There are 2.5 million patients in the United States who have OUD. Many of these vulnerable patients will be admitted to the hospital at some point during their disease. Just as hospitalists actively treat chronic illness such as diabetes and heart disease, so to must we actively take steps to offer evidence-based therapies for this population; one that has been stigmatized and underserved for far too long.

Hospitalized patients with OUD are offered little more than detox. Yet we know that less than 20% of patients addicted to heroin remain abstinent after 30 days. We also know that patients being initiated on buprenorphine therapy during hospitalization reduces opioid use at six months post-discharge, and that almost half will enter outpatient MAT.

The time has come for hospitalists to be engaged in this work. We should be empowered to do so through support from programs like Project SHOUT and free courses for buprenorphine prescribing.

Despite a plethora of reasons to offer MAT on medical and surgical wards, there are a scant number of programs in the nation’s 5,500 hospitals. One common explanation is that the work of MAT is meant for “drug rehab” and psychiatric facilities. As illustrated in Alvin’s case, the naysayers are dead wrong.

About the Author: Richard Bottner, PA-C

Richard Bottner is a hospital medicine PA in Austin, Texas and a clinical assistant professor of internal medicine at Dell Medical School. He also leads The B-Team, an interprofessional and multidisciplinary consultation team that offers full-service buprenorphine inductions on medical and surgical wards. The work is supported by the NIDA Clinical Trials Network Dissemination Initiative, through a partnership with the PA Foundation. This article was adapted from the American Academy of PAs.

1
The kids are navigating the crisis with maturity and aplomb and way too much “Clash Royale.” Online school somehow went through the wash and has shrunk to 3 hours, including lunch. They continue to seek ways to fill up the day. We’ve tried to set some clear goals, pulled out the QI toolkit and made […]
Read More
Provider and Patient Experience: Lessons Learned during the COVID-19 Pandemic
By Jashanpreet Singh, MD, FACP, SFHM
May 5, 2020 |

0
Each day, we’re inundated with news about the COVID-19 pandemic and how it continues to strain our healthcare system and resources. With more than 1.15 million positive cases in the U.S. and over 67,000 deaths as of this writing, it has been a scary yet humbling experience for everyone. There is no doubt this pandemic […]
Read More