Locums vs F/T Hospitalists. Do Temps Stack Up?

Do locums hospitalists outperform…or even make the cut? A new investigation tackles the question, and I will get right to it.

In a nutshell, locums docs provided a similar level of care as staff doctors according to a JAMA study published last week. Researchers analyzed 1.8 million Medicare patients hospitalized between 2009 and 2014 who were treated by F/T hospitalists (identified by submitting >90% inpt billing codes) versus locums hospitalists (there is a locums billing code–who knew). The investigators did not find any significant difference in 30-day mortality rates between patients groups.

I liked this figure comparing the DRGs seen by each practitioner group. Note the difference in joints at the bottom: 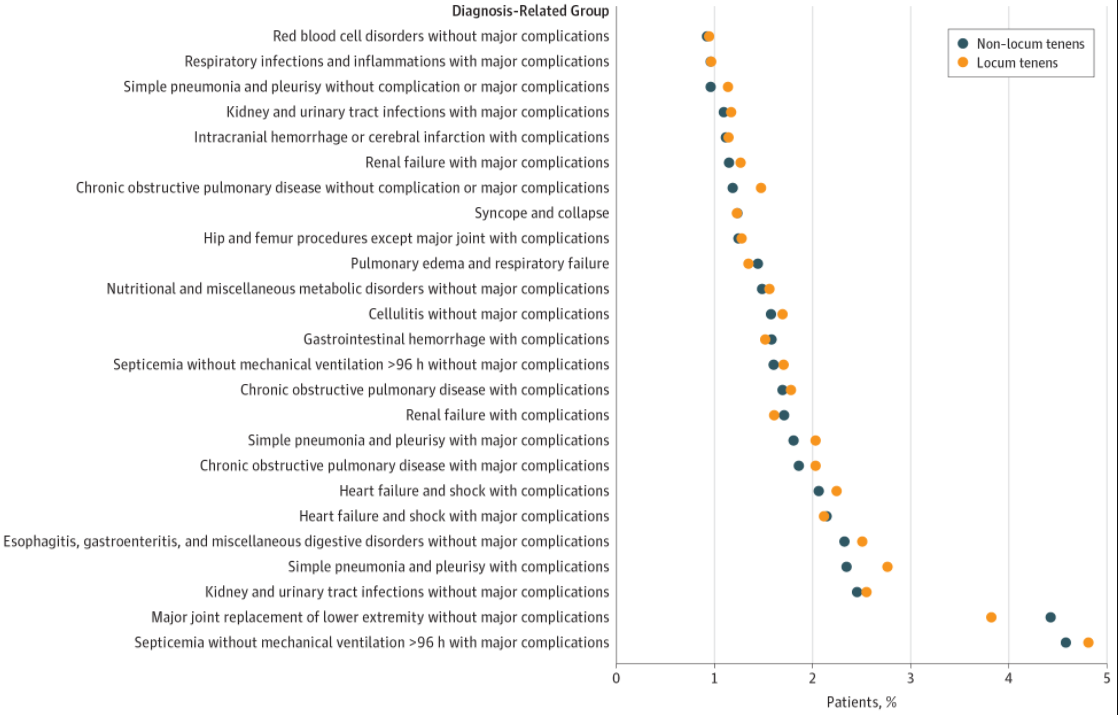 A few things. For one, mortality is a messy outcome to measure (low-frequency event for individual docs) and for me, it’s not the end result I am most interested in. Second, the secondary analysis is what I want to know more about and requires more study. The signal is full-time docs outperform–but the result is still tentative and only hypothesis generating. Third, and of most curiosity, are many hospitalist groups hiring “hobbyists,” i.e., docs who are sticking around for a year or two looking for fellowships or still deciding on a career path. In my book, they are not lifers, don’t have the F/T perspective, don’t build an inpatient provider mindset for the long haul–and probably practice as such. If that is the case, the results of the study are biased downwards and underrepresent what career hospitalists can deliver.

0
“…such disparities, which are biological in their expression but are largely socially determined” – Paul Farmer, MD I read this quote, and now more than ever, I find that it resonates with me in a new way. I am a nocturnist at a community hospital in one of the most diverse cities in our country, […]
Read More
Moderna and N=8
By Bradley Flansbaum
May 26, 2020 |

0
You probably heard the news about the hopeful vaccine and the Phase I preliminary findings (catch the subject line). Keep in mind, most Phase one trials flame out before they get to Phase IV. Vaccines are one of those subjects I take for granted until I recertify for the boards. I know the basics, but […]
Read More
Provider and Patient Experience: Lessons Learned during the COVID-19 Pandemic
By Jashanpreet Singh, MD, FACP, SFHM
May 5, 2020 |

0
Each day, we’re inundated with news about the COVID-19 pandemic and how it continues to strain our healthcare system and resources. With more than 1.15 million positive cases in the U.S. and over 67,000 deaths as of this writing, it has been a scary yet humbling experience for everyone. There is no doubt this pandemic […]
Read More