What’s on Your Nightstand?

Before going to sleep read for half an hour, and in the morning have a book open on your dressing table.

What is on your nightstand? I’m not asking about the NEJM issue from 2013 that you still haven’t gotten to; or the gadgets glowing or dinging through the night; or the accumulating used tissue pile since you and all your patients now have the flu.

What books are on your nightstand? As Osler would ask, what are you reading the last 30 minutes of the day? I’ll tell you some of my list from 2014, and then a preview of what’s ahead for 2015.

(Not all of these books were published in this past year. Like that 2013 NEJM article that sits unread, I’m a bit behind on my reading). 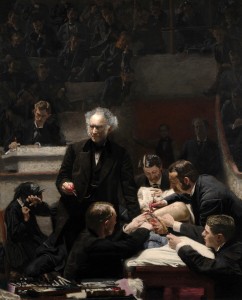 The Anatomy Lesson, by Nina Siegal

I was in Philly this past year, and stopped in the Philadelphia Museum of Art for the first time. I headed straight to the American section to gaze at two masterpieces of American and medical art. On opposite walls, lie the larger-than-life Eakin paintings of the surgical amphitheaters in the late 19th century. The Agnew Clinic facing off against the Gross Clinic. The inspiration for these was most certainly Rembrandt.

The Anatomy Lesson of Dr. Nicolaes Tulp, which in turn was inspired by the works of Vesalius. This fictional account of the birth of that painting, and in particular, the cadaver that lies at the center, is a great example of uncovering stories to create a new world heretofore unknown. The painting and the story behind all the elements, not just Dr. Tulp, come to life.

This one takes place in Philly (you can reward yourself with a cheesesteak if you read both of these), transporting the reader only 200 years back instead of almost 400, like The Anatomy Lesson. Visiting the Mütter Museum would be recommended first, and having the story behind the collection come alive was a great companion. This account of the man behind the collection is a stop back in time about the origins of medical education, medical oddities, and 19th century medicine.

The Children Act, by Ian McEwan

McEwan, who wrote another terrific medical themed book, Saturday, tackles religion and science in his latest. The story centers around a lawyer deciding on a life-saving blood transfusion for a young boy who is Jehovah’s Witness and refusing treatment due to his religious beliefs. This outlines a battle over patient autonomy and primacy of patient welfare. The twist here is that the boy is three months shy of 18, so the court and the main protagonist will decide. Religion vs. Secular Notions. Faith vs. Science. McEwan is at his best when discussing the case and the opposing views.

Blood Work. A Tale of Medicine and Murder and the Scientific Revolution, by Holly Tucker

Who performed the first blood transfusion? This question turns into another reading about transfusions and religion versus science. Science doesn’t win this initial battle, as the soul lies in the blood. Visions of chimeras scare away other scientists, and Jean-Baptiste Denis becomes a 17th century hero turned murderer. The pages bleed into a murder mystery and scientific look at the history of circulation and transfusion.

The Plague, by Albert Camus

Albert Camus’ classic is essential reading, and I reread this in 2014. In light of Ebola, in light of any threat that challenges our existence and rallies the community, this book is as relevant today as it was when it was written. A good companion to this novel is Year of Wonders, by Geraldine Brooks, which is a fictional account of the plague in England during the 17th century. Many echoes to current public health threats and how we respond (both rationally and irrationally) are in these books.

The Empathy Exams, by Leslie Jamison.

This book opens with the author’s experience as a practice patient in a medical school. It winds its way through Morgellon’s disease, brutal marathons, personal challenges with illness, and side trips through Tijuana. Through it all tries to keep all perspectives alive and searching for the compassion in all.

The Circle, by David Eggers

Eggers books on Katrina (Zeitoun) and the South Sudan (What Is the What) are must reads. In one of his more recent works, he creates a fictional Google-like company run amok in the near future. Be afraid of a digital world!

The humanities have always been an important aspect of medicine, adding to the art as we continue to refine the science. The arts enhance empathy and compassion. They can help us become better storytellers and story gatherers.

Every day at work, I seem to learn a lesson about missed or incomplete narratives. The patient with seemingly unexplained abdominal pain, yet the true reason for the patient’s woes lies in a tale of lost independence, lost family, and undiagnosed depression. Or the AMA patient. “Just let her leave,” the staff cries. “She always does this!” But the story reveals a concerned mother who has no one to care for her kids. What better way to improve how you unlock the story of your patient then to read and to reflect?

P.S. If you open up Osler’s Aequanamitas, the back page lists the Top 10 Osler bedside readings:

Jordan Messler, MD is the Executive Director, Quality Initiatives at Glytec and works as a hospitalist at Morton Plant Hospitalist group in Clearwater, Florida. He previously chaired SHM’s Quality and Patient Safety Committee. In addition, he’s been active in several SHM mentoring programs, including Project BOOST and Glycemic Control. He went to medical school at University of South Florida, in Tampa and completed his residency at Emory University. He recognizes the challenges of working in a hospital that lines the intracostal waterways of a spring break mecca and requests that if you want to be selected as a mentored site, you will have a similar location with palm trees and coastline nearby. He tries to find time to sit on the beach with his family to escape the hospital’s miasma. While there, he looks forward to reading about the history of hospitals/medicine, and how it relates to quality. But inevitably, he will have his daughter dumping sand on him and then has to explain to his wife why their daughter is buried up to her neck.